Finally met up with Hector after he got discharged from the hospital a few weeks ago. I felt really bad because I was supposed to visit him at his place, but I got too caught up with my own things, preparing for exchange etc. We chose a place as close as possible to his place, so that it wouldn’t be too much of a hassle for him to hobble down with his crutches. He’s so nice, he wanted it to be convenient for us too, but we insisted. Anyway, Lorong Kilat is a walkable distance from the 961 bus stop that drops close to Beauty World. I never realised that Carpenter and Cook was so close to the Chicken House, which I always saw across the street from Ng Kim Lee Confectionary at Chun Tin Road. 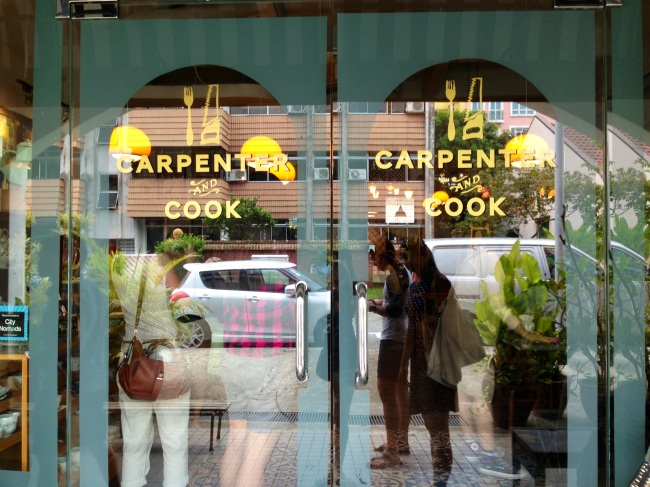 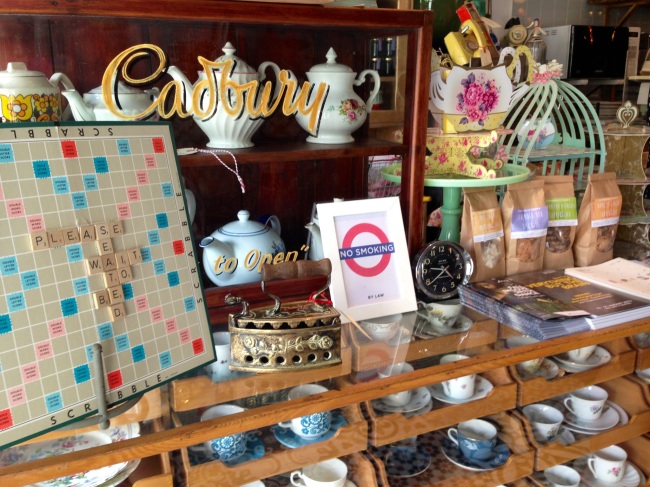 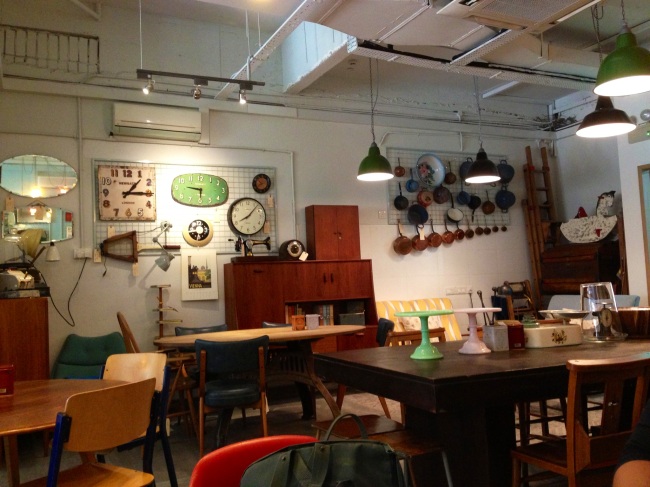 The cafe has a very artsy vibe to it, with interesting antiques on display and on sale. We arrived at about noon and it was empty. I’m guessing it’s more of a tea place as they don’t serve a lot of savoury items on their menu as compared to sweet items such as their cakes and tarts. It’s not the typical eggs benedict kind of brunch place.

We saw many interesting antique items on sale. Mirrors, clocks, crockery, tea sets and lights just to name a few. I kept looking around while waiting for Hector to arrive. It’s safe to say I wouldn’t get bored here waiting. 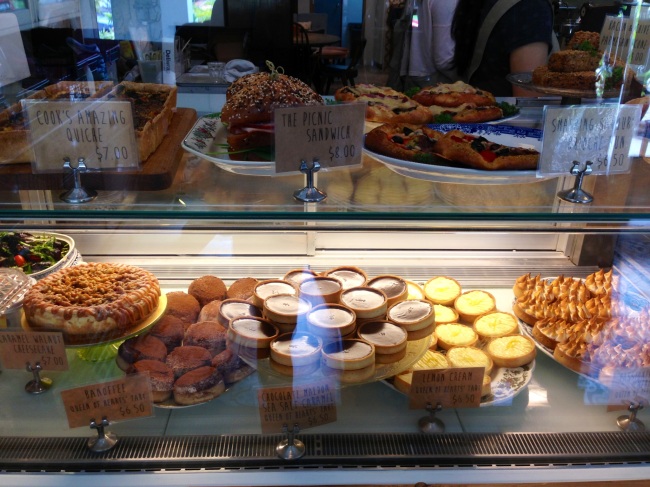 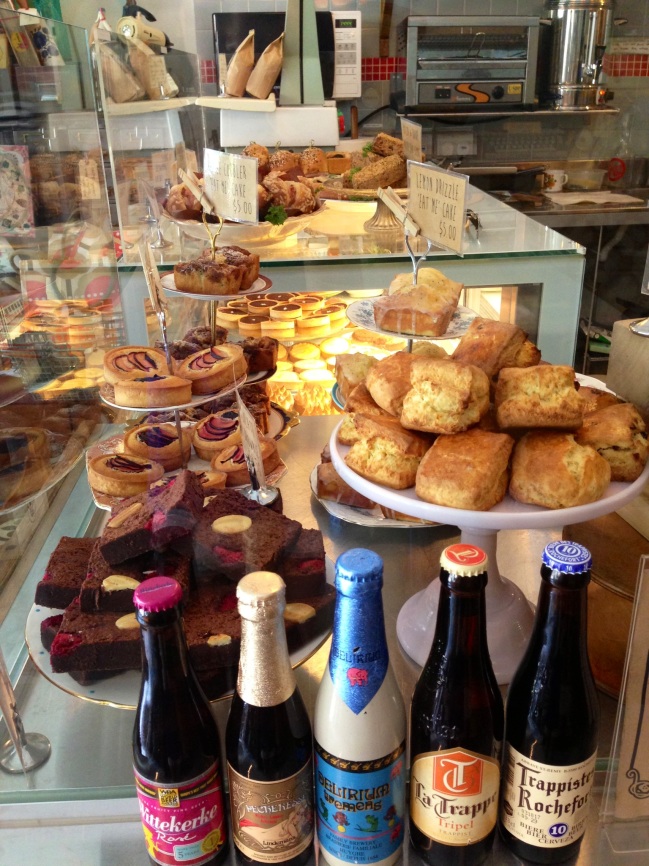 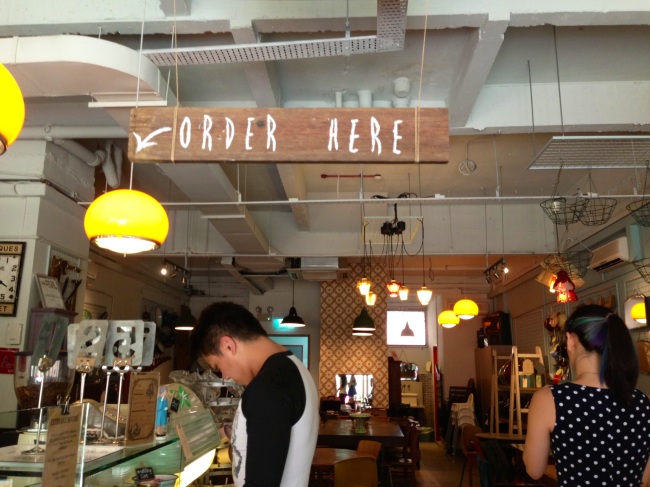 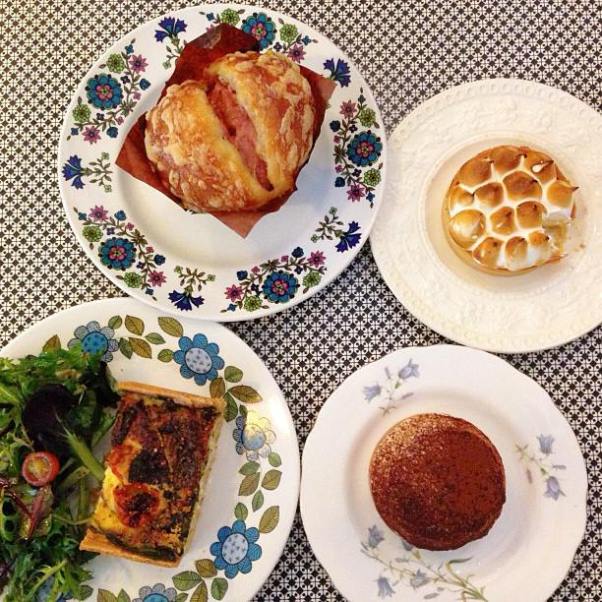 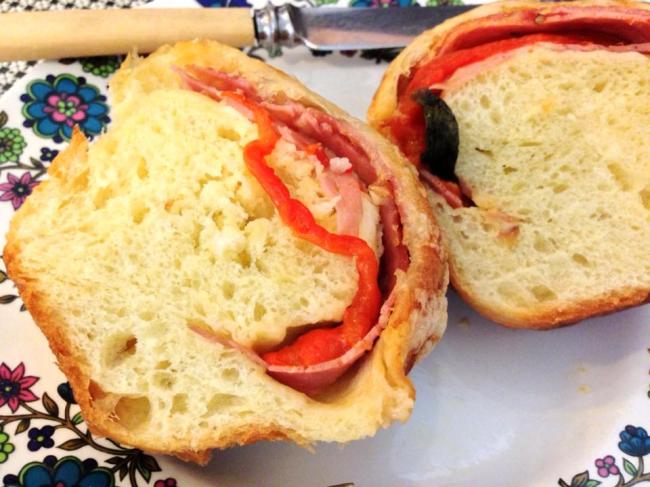 I know it seems extremely pricey for a bun, but the Swirly Bun was amazing! The brioche was so soft and fluffy. I just went “mmm!” when I ate it. Stuffed with ham, tomato (or was it red pepper) and topped with cheese, it was yummy. I much prefer it to the quiche. So if you’re looking for something savoury, the Swirly Bun beats the quiche! 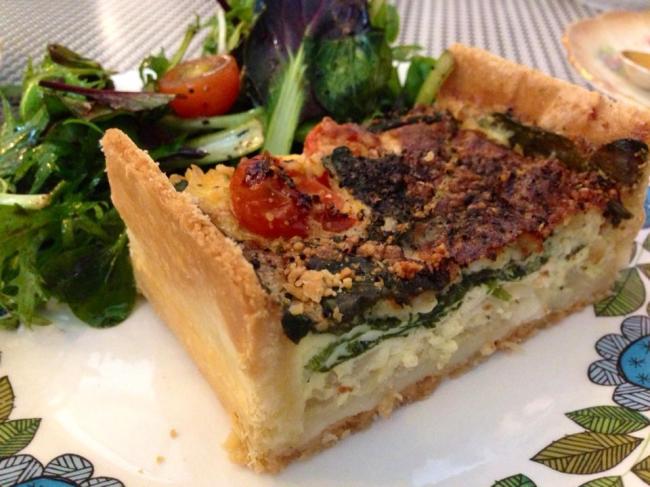 Cook’s Amazing Quiche (Spinach and Tomato), served with side salad – $7

Also a little pricey for its size, the quiche was just average. They were serving two kinds of quiche, the spinach and tomato one that we ordered, as well as a bacon version, but we chose the spinach because the staff recommended it. Well, maybe if it was warm, it might have tasted better. I just picked at the crust, as I always do with any sort of pastry. 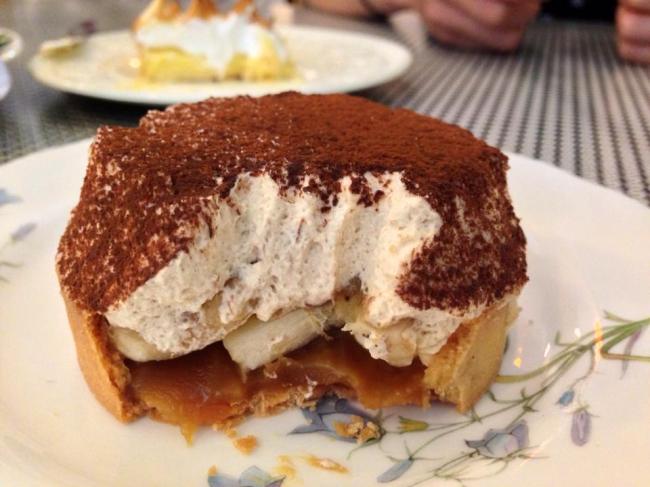 We had to order the Banoffee Tart! Hann Khee and I are obsessed with Banoffee, ever since we had that obscenely good one at Delicious last year. However, this was no where as awesome. In my opinion, it was a little too light, with more cream, and too little banana and toffee. The sprinkling of cocoa powder on top of the cream also made it a little too bitter for us. We tasted a little hint of coffee powder, but maybe it was just the bitterness of the cocoa. I wouldn’t say it was bad, it would probably taste good to someone who isn’t making a comparison. 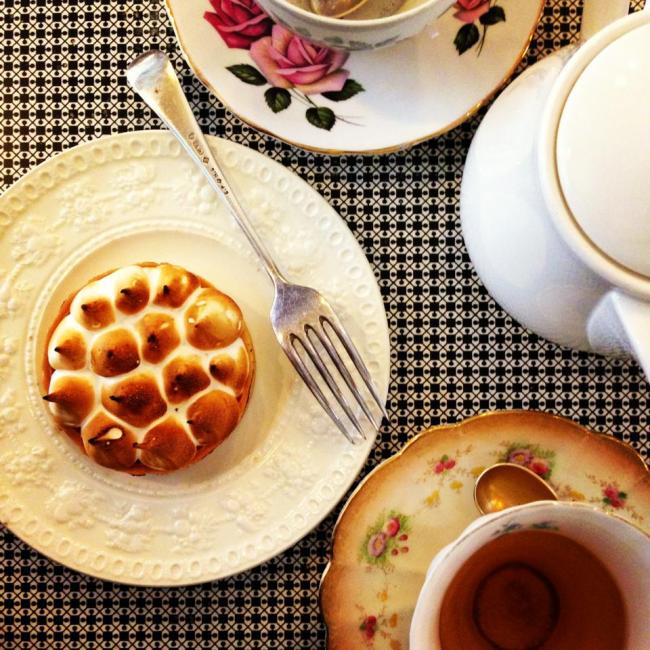 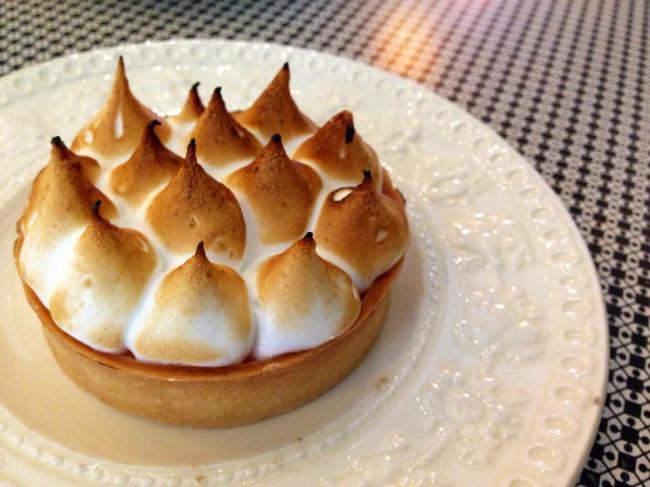 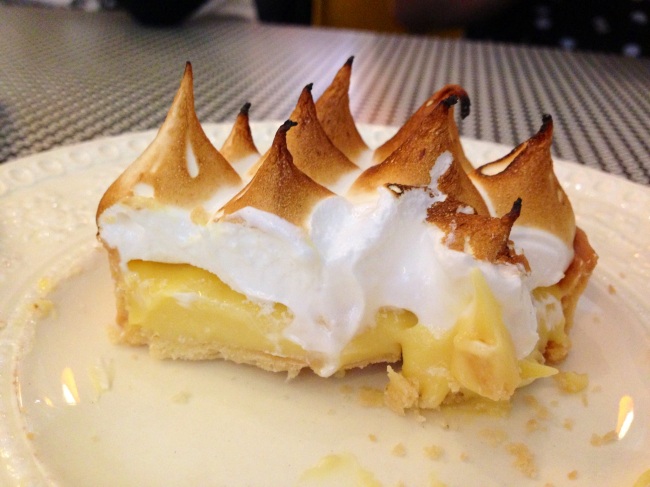 We ordered the Passionfruit Meringue Tart also because Ivy and I fell in love with the one we had at Overdoughs a couple of months back. Once again, this paled in comparison, but wasn’t bad. This was not as tart as the one at Overdoughs, the meringue wasn’t as sweet or anywhere as sticky, and the crust is a simple one, unlike Overdoughs’, which is a cornflake crust. I would have preferred it to be at least a little more tart. (Review of Overdoughs here and here)

Ivy and I also ordered a pot of hot cinnamon tea to share. The cinnamon tea has a slightly sweet aftertaste. It very much reminded me of the oatmeal I have for breakfast. I love cinnamon. I put cinnamon in a lot of things that I bake because it simply has the best smell coming out of the oven 🙂 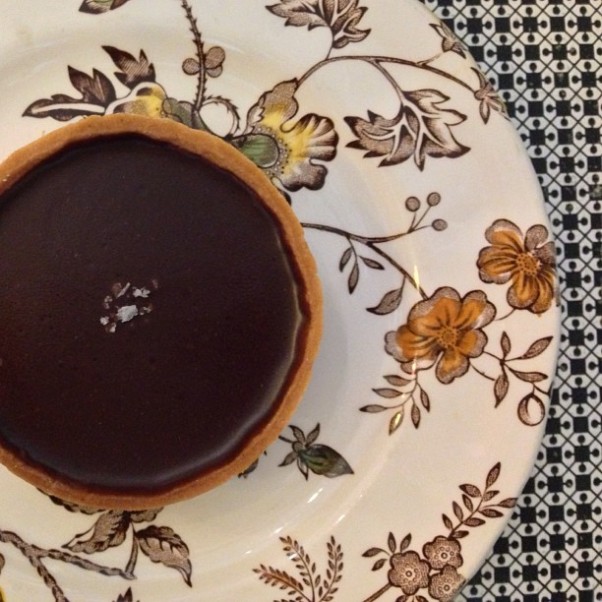 After finishing our initial four orders, we ordered the Chocolate Sea Salt Caramel Tart. I wanted to order it at first, but no one seconded me! Anyway, the staff did recommend this tart, and I was eyeing it because I had read many good reviews for this tart. How could you go wrong with chocolate and sea salt caramel?! The sweet and salty flavours combined perfectly. I declare this the winner in the tart battle.

At about 2pm, the cafe started filling up and was fully packed as we were about to leave. 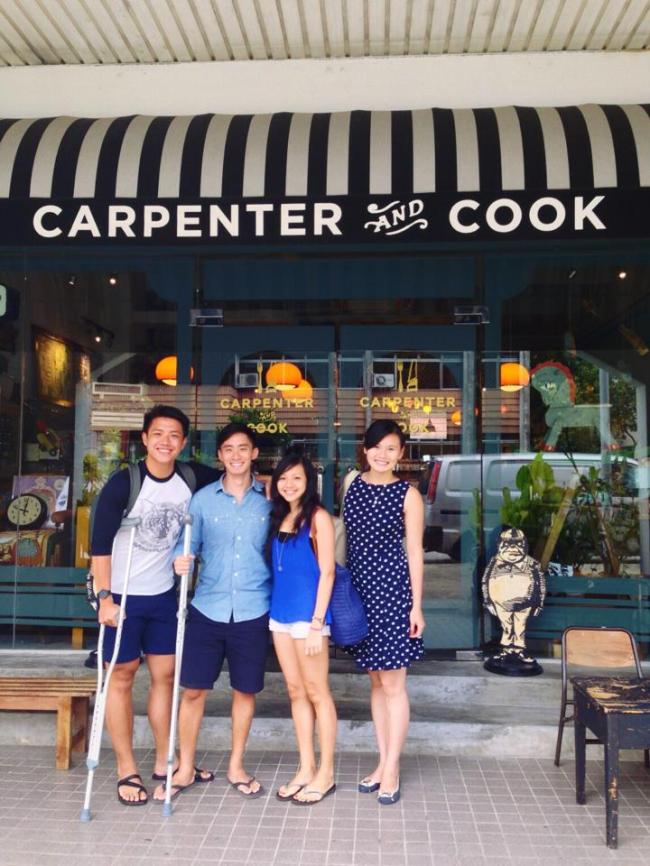 My lovely friends. Two injured fools and the beautiful Ivy, all coincidentally dressed in shades of blue.

No more meet ups with friends, for I am leaving for Europe tomorrow! Just the last few items to pack and I’m all set. I can’t wait. It’s going to be an epic adventure 🙂

Brunch at Carpenter and Cook