It was just Dj and I this time. There is a romantic air about this city.

We arrived in the late afternoon, having taken the bus from Graz straight to Venice. We spent the remaining hours of light outside wandering the Floating City. There are wonderful photography opportunities at every corner. 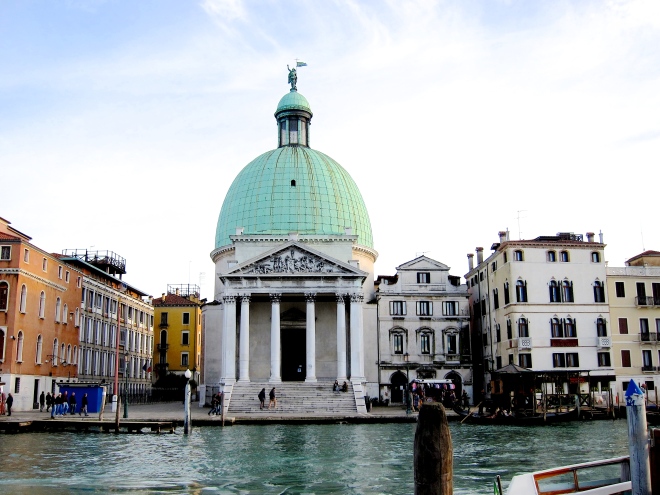 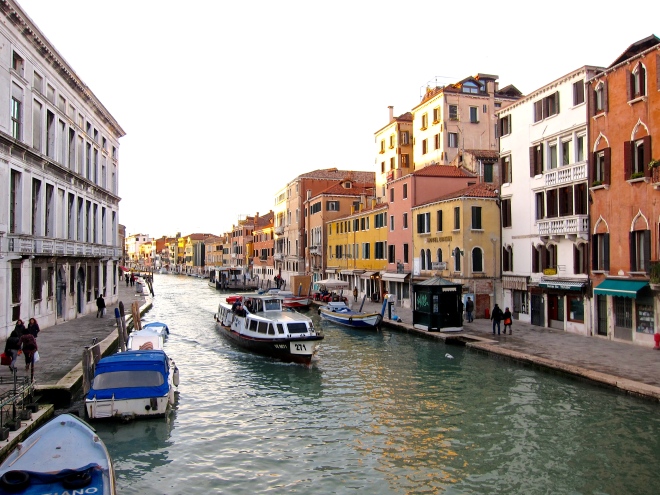 There is something really serene about Venice. Maybe it’s the lagoon – the turquoise waters that bring about a sense of peace; maybe it’s the old buildings, weathered, and seemingly floating, just like the gondolas. Even though it was a high season, somehow I was in my own world; for once, the crowd didn’t bother me. This was pretty much the perfect trip. 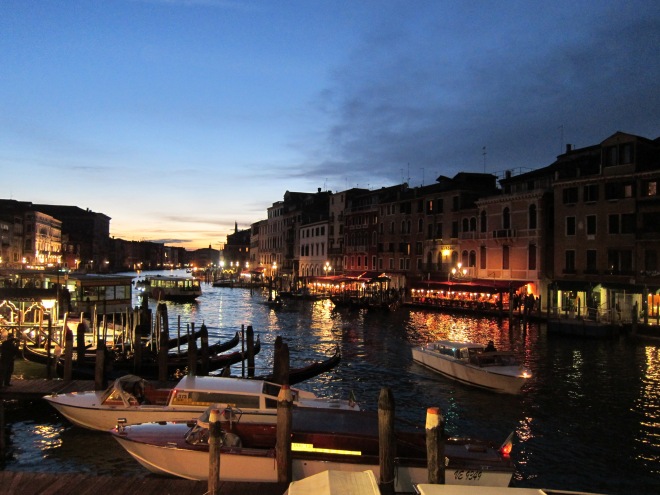 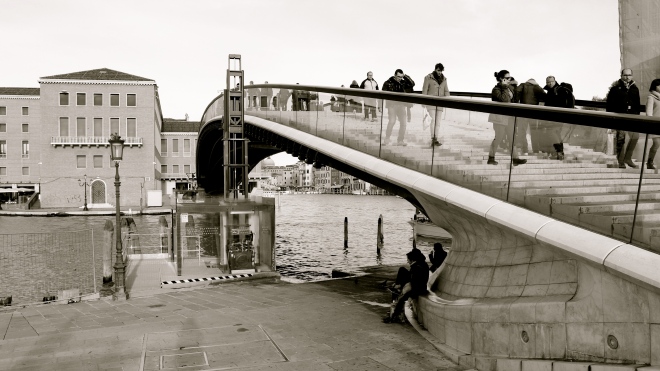 The crowded streets of Venice

The narrow alley to our hotel

The gondola is a traditional Venetian boat which was one of the most commonly used modes of transport around the lagoon. I know it is a must-do when in Venice, but we didn’t go for a ride, choosing to walk around everywhere instead. It is pricey – €80 for 40 minutes. Also, it is not guaranteed that your gondolier will serenade you. 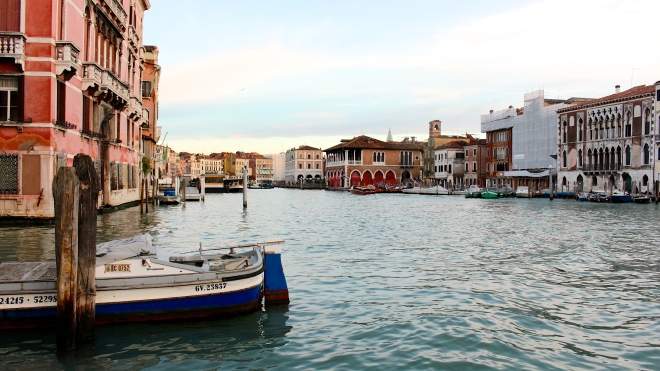 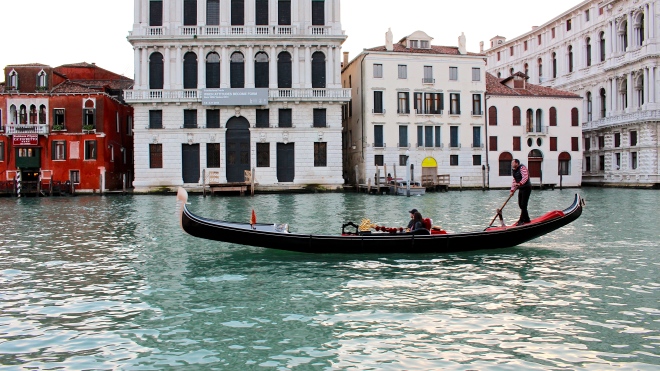 The narrow alleys and streets can be rather confusing, like a maze, and you definitely do not want to get lost, especially at night as the streets are rather poorly lit. Carefully look out for the signs that point to the main squares and landmarks around Venice. We often followed the signs pointing to St. Mark’s Square or the sign towards Santa Lucia station for general directions.

Torrone, better known to us as nougat, can be found in most of the confectionery shores in Venice. They come in all sorts of flavours – traditional with nuts, chocolate, tiramisu, fruits etc. I was very attracted by them, but they cost about €8 per slice, so I just hung my head and left every time. SIGH. 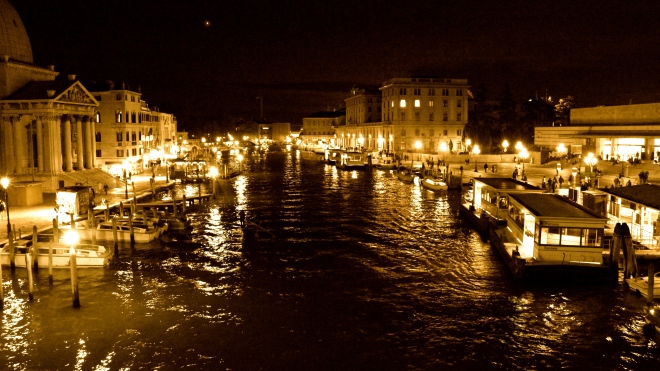 I hereby declare the national food of Italy, gelato! No, not pizza, pasta or risotto, but gelato. With fewer calories than its cousin (ice cream), gelato has a higher ratio of milk to cream (less fat), is churned at a slower speed (less air), giving it a denser consistency, and is served at a slightly higher temperature than ice cream, which explains why gelato can be scooped and is often shaped into roses. This makes gelato my number one dessert choice!

My chubby face by November 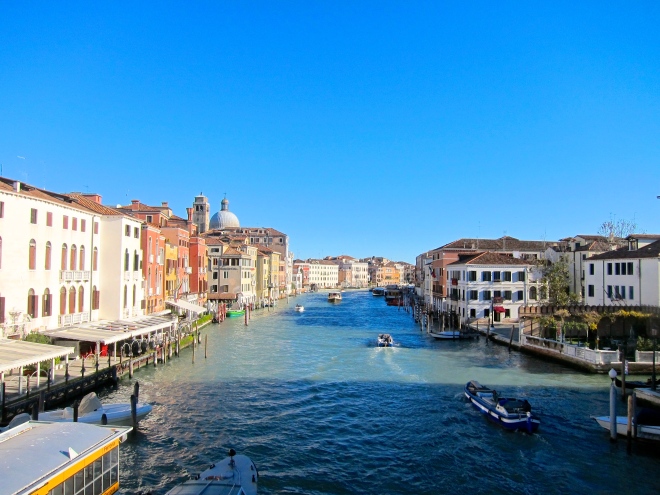 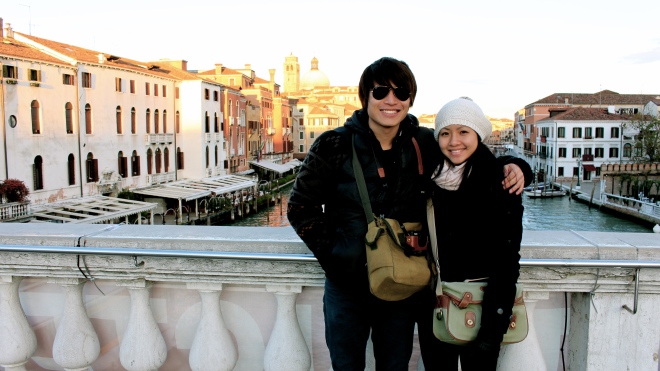 We were lucky that the days we were there, the weather was pretty good. The sun was out in the day, giving us some warmth if we stood where the rays hit. But as Venice is all water, there was often a cold breeze that made it unbearable as the day passed. 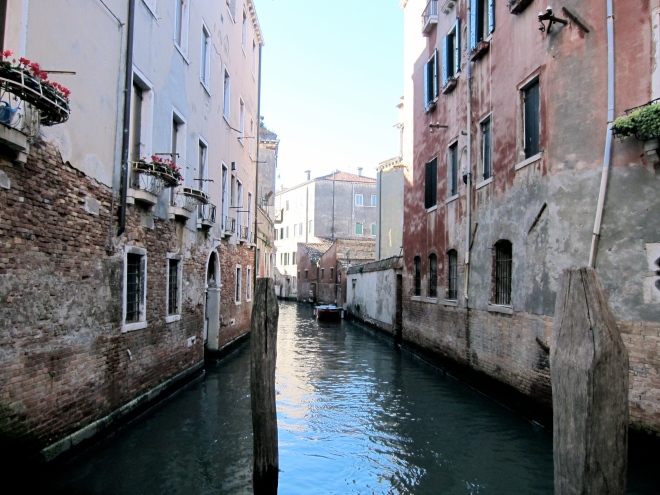 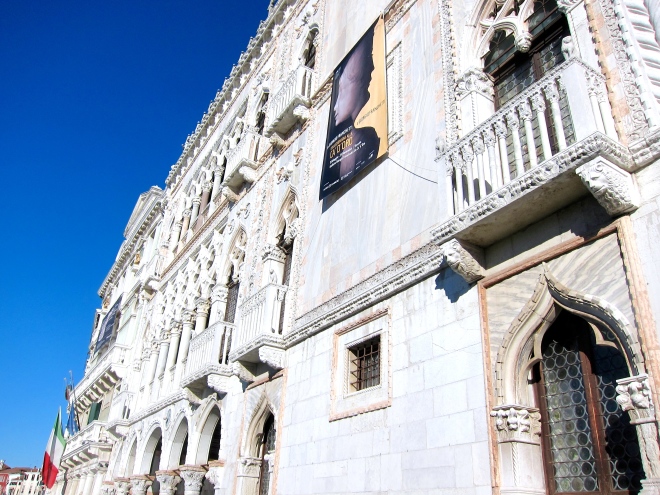 One of the best things I ate in Venice, hell, in all of Italy, was Cannoli. HOLY CANNOLI. Cannoli is a dessert pastry, which means “little tube”, and has its origins in Sicily. Deep-fried pastry with smooth, creamy, cold and sweet ricotta as a filling, and dipped in crushed pistachio. Fortunately, this was affordable, compared to the torrone. If I had found the store again, I would have bought yet another to devour. Fortunately, or unfortunately, I didn’t.

One of the highlights of our Venice tour was St. Mark’s Basilica and St. Mark’s Square.

Besides being crowded with people, Piazza San Marco is crowded with even more pigeons. I hate them. They fly right into you and they poop everywhere. 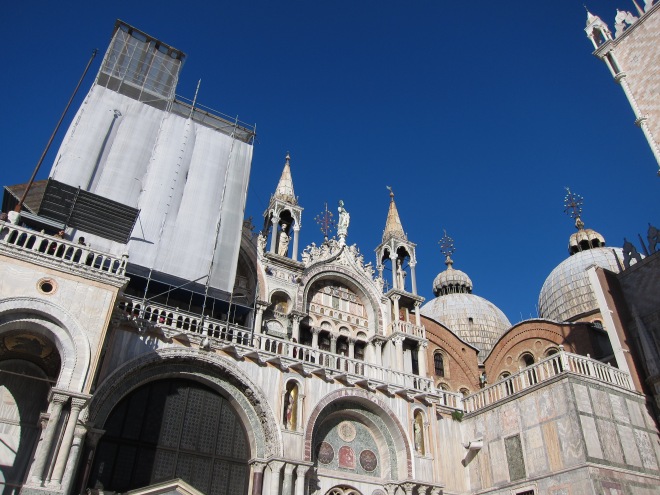 The most famous church in Venice is St. Mark’s Basilica. With its stunning Byzantine architecture, and gold mosaic tiles inside, the church is a symbol of Venice’s rich history, giving it the nickname Chiesa d’Oro, or Church of Gold. 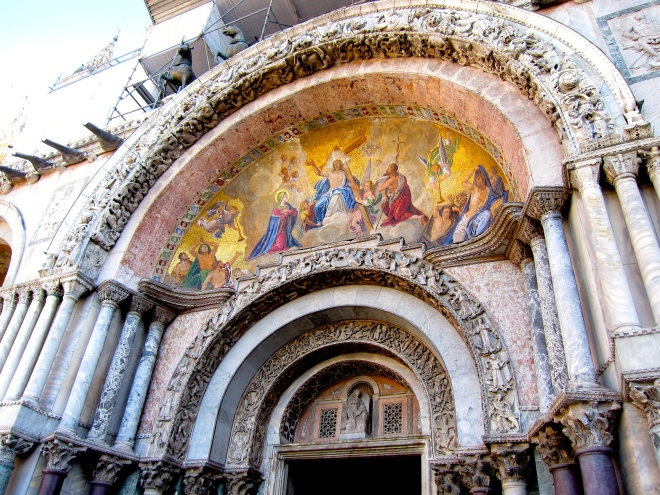 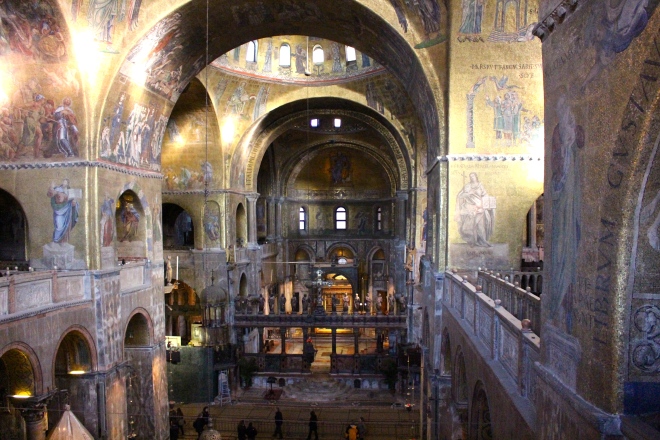 There are more than 8,000 square meters of mosaic in St. Mark’s Basilica. “For centuries it had been claimed that simply breathing the air of St. Mark’s would make you a richer person.” I wish I had read Inferno before visiting Venice. Reading it afterwards, now I understand so much more about Venice and St. Mark’s. We took the museum tour, which was €5, but it wasn’t great – no guide, not much information given. After the museum, we entered the church, which was free. The church is beautiful. Remember to breathe in.

Close up from the corridor of St. Mark’s Basilica 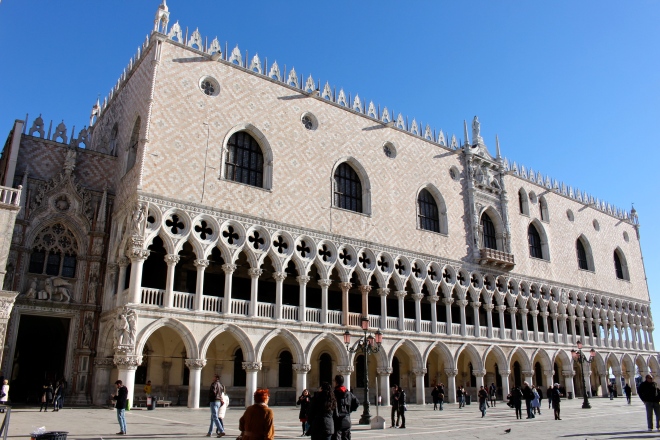 After we had explored St. Mark’s Basilica, we walked along the shore. There were so many gondolas in sight. It was like seeing taxis parked outside the airport.

The elaborate Venetian masks are donned during the Carnival of Venice, or Carnevale di Venezia. There are many different kinds of masks. These, I find really beautiful. If I had lots of space in my luggage, I would have bought one. However, there are many other creepy masks which are bound to give you nightmares (I’m researching this in a dark room now), such as the Plague Doctor (Medico della peste) masks. These masks were used by doctors during the outbreak of bubonic plague during the 1600s, which caused the deaths of thousands in Venice alone. Once again, I think reading Inferno by Dan Brown might educate you a little more on this subject. 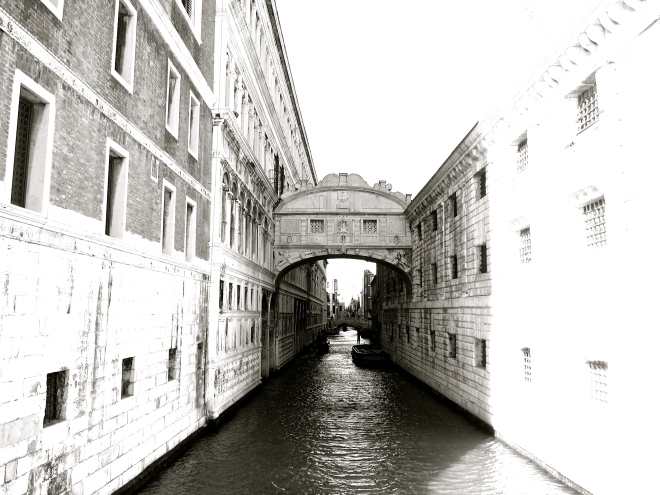 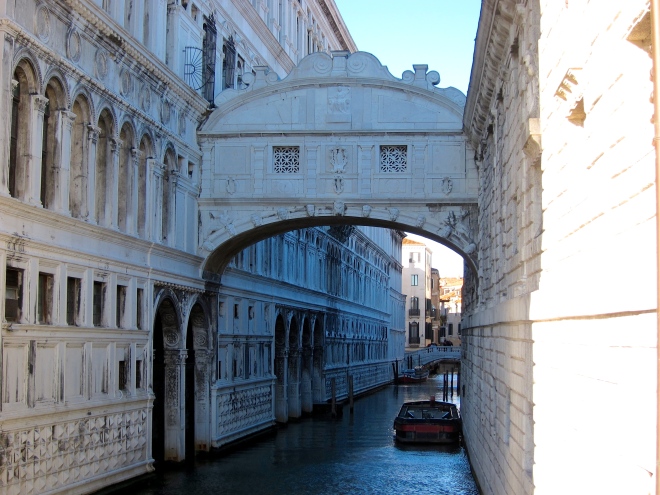 The Bridge of Sighs is another famous bridge. It was once used to connect the Old Prison in the Doge’s Palace to the New Prison, which is just across the Rio di Palazzo. There are various stories about how the bridge got its name. One claims that it comes from the sighs of prisoners as they crossed the bridge; another claims that it comes from the sighs of lovers who kiss while on a gondola under the bridge, overwhelmed by romance as their kiss guarantees them everlasting love.

Before heading back towards the hotel, we hunted for another gelato place to get our daily dose. Suso is pretty famous. I had tiramisu, and it was delish.

We finally found a supermarket to get some food, and I saw these wonderful Panettone packed in really cheap plastic for sale. This was my first time trying this Christmas bread, and I was addicted. Amazing citrus flavour, soft, airy, sweet… Needless to say, I bought even more the next day. 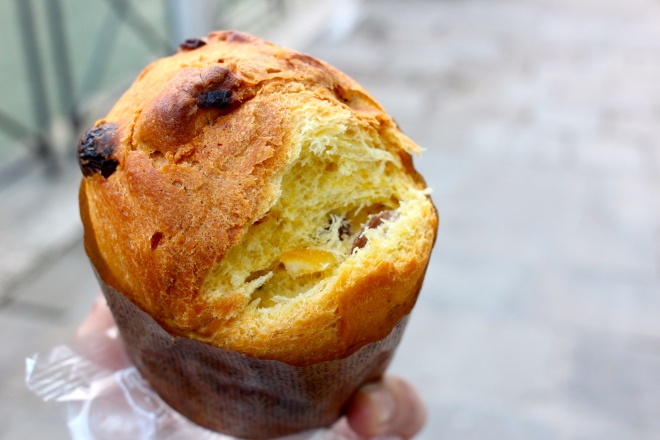 The next morning, we woke up bright and early to visit the other islands of Venice. I have heard so much about Murano and Burano – Murano for its glass and Burano for its cheerful, colourful buildings.

We bought the day pass for the boats. It was quite costly, but it was worth it considering you have unlimited rides to as many islands as you want, and also rides within the main island for the day. A friend actually told me that it wasn’t necessary to buy the tickets because no one actually checks, but I wasn’t about to take that chance. Fortunately, we did buy the tickets because there was someone on one of our boats who was inspecting. But that was just one boat out of the many we took that day.

Our first stop was Murano to see the famous Murano glass. For centuries, Murano has been known for its glassmakers. We had breakfast first before heading to the museum. 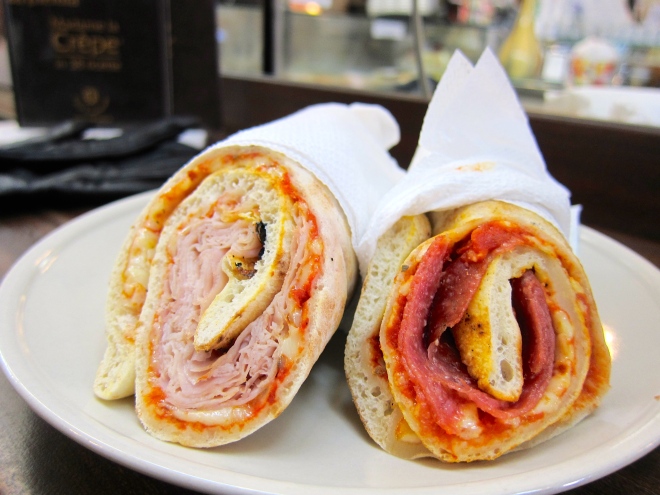 We walked all the way to the museum, only to find that a couple of their rooms were closed for renovation, so it was not worth going in this time. But we definitely didn’t feel like it was a wasted trip. We walked around Murano for a bit more, exploring, and found these wonderful glass ducks near the boat station.

Burano was the highlight of my entire trip to Venice. Although there isn’t anything much to do there except look at bright, colourful buildings all day long, there was just something so charming about that little island. 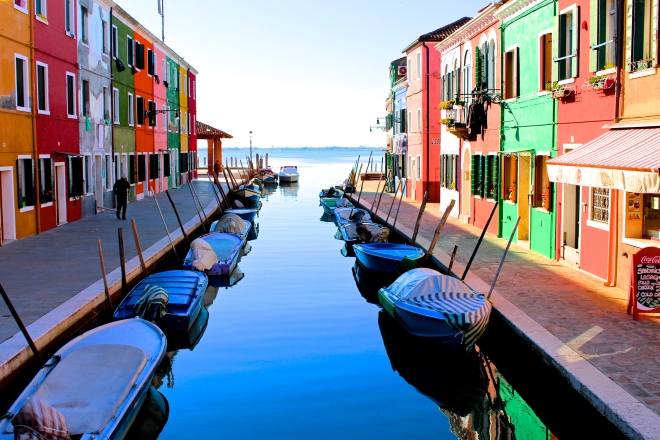 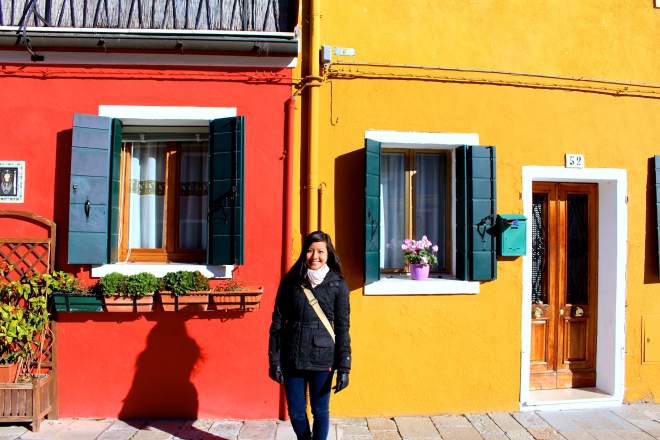 I don’t think I felt so happy in quite some time. The weather was perfect, my boyfriend is always perfect, Burano was perfect.

We spent a few hours on the island before we headed back to the main island. 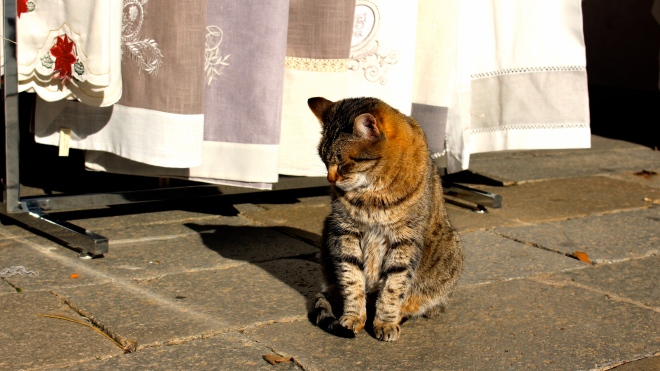 I found a little traditional bakery selling the most amazing looking cookies and cakes, most of which are Italian favourites. I bought the Venetian butter cookie, which is shaped like an “S” and has a slight lemon-scent to it. So simple, but so good. 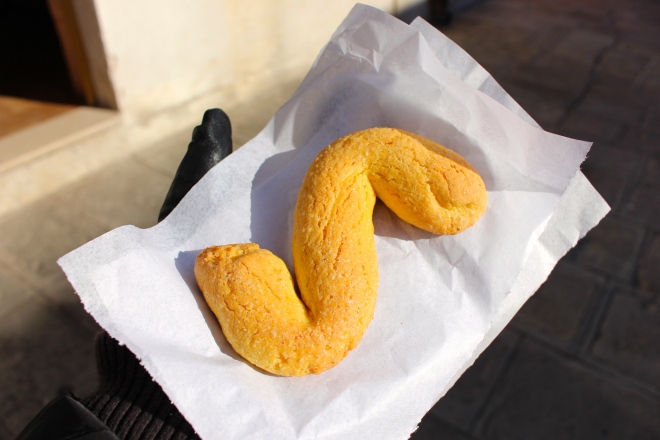 Dj stopped for some pasta and he stole the grissini from the tables next to us. He was very proud of it. 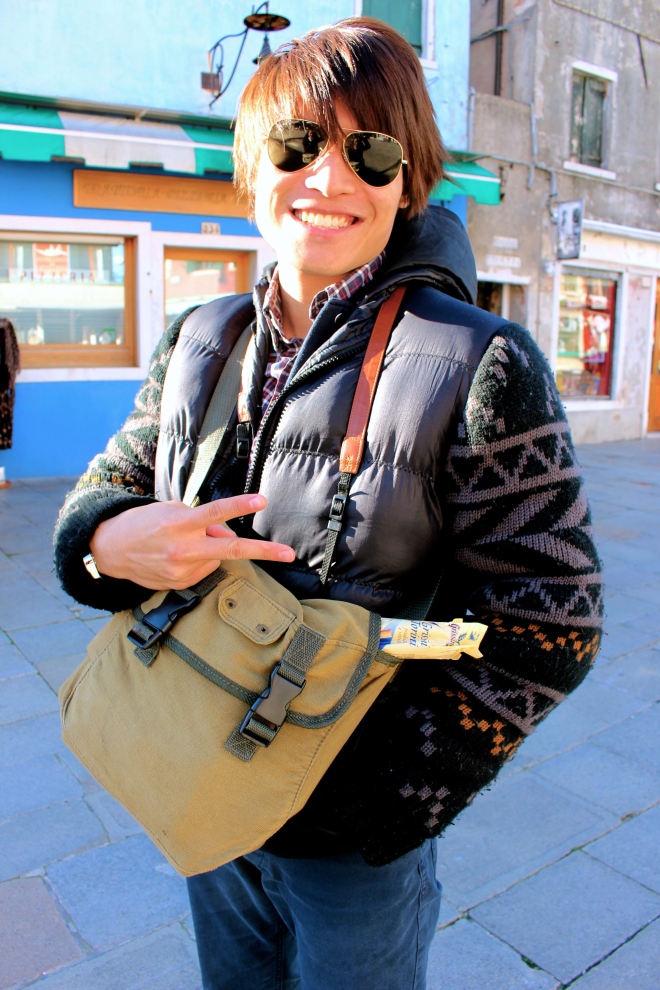 My cheapo boyfriend and his grissini 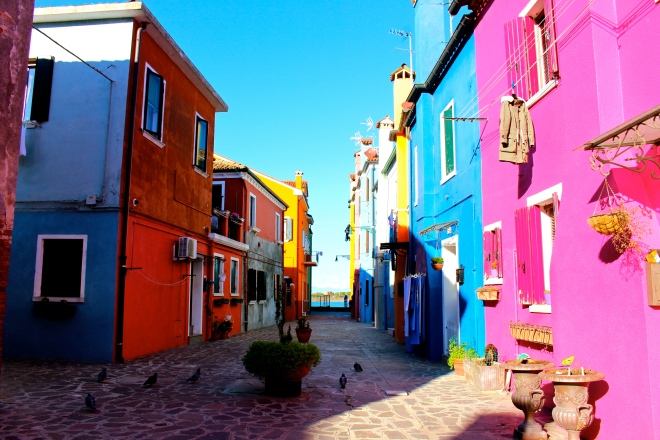 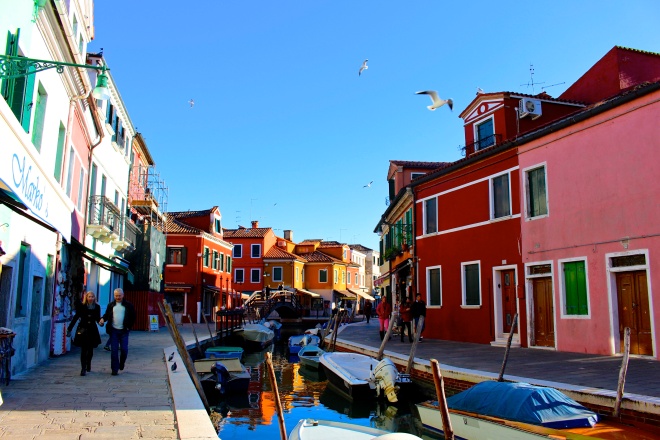 We bid Burano goodbye and headed back to wrap up the day. We took another boat back and we were greeted with spectacular views of Venice during sunset. 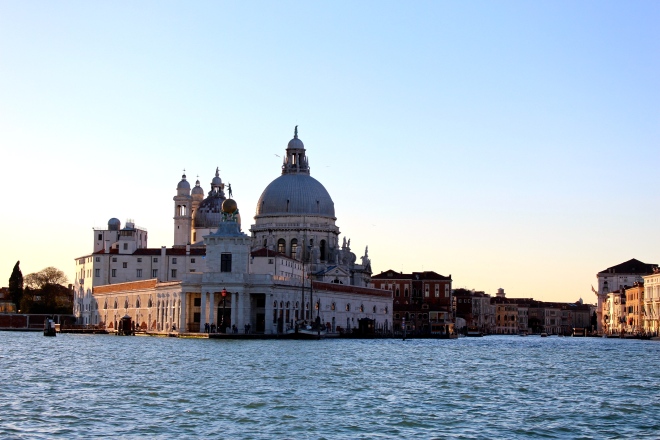 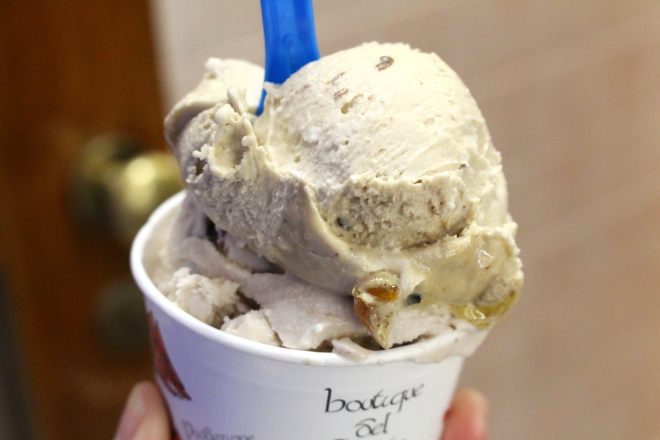 I never expected this trip to be as good as it was. Yes, it was kind of touristy, but I believe everyone should visit Venice (before it sinks) at least once in their lifetime. Thank you, Venice. I’ll definitely be back again 🙂