There is probably no place in Austria so surreal, so peaceful and so picturesque as Hallstatt.

Peiwen and I did a short day trip to Hallstatt. I came from Graz, while she came from Salzburg. We ended up on the same train. My jaw literally dropped when I got off the train.

Across the tranquil Hallstätter See (Hallstatt Lake) is the village of Hallstatt. Since medieval times, this village has be known for its salt trade. Its name, Hallstatt, means “salt place” in Celtic. Even today, you can still visit the world’s oldest salt mines. However, as we were there in the winter, the salt mines were closed, but we still had an amazing time just strolling along the lake and wandering around the “pearl of Austria”. It’s times like this that I’m happy I invested over a thousand dollars on a good camera. My photos are minimally edited on iPhoto (that’s all I can manage) and they look really good, yet, I feel that they offer only a small glimpse into the beauty of Hallstatt.

Hallstätter See with Hallstatt set against the mountains

Hallstatt is a UNESCO World Heritage Site. “Human activity in the magnificent natural landscape of the Salzkammergut began in prehistoric times, with the salt deposits being exploited as early as the 2nd millennium BC. This resource formed the basis of the area’s prosperity up to the middle of the 20th century, a prosperity that is reflected in the fine architecture of the town of Hallstatt.”

When you arrive at the train station, the only way to get to Hallstatt is to take a boat across the lake. The boats all have a schedule pasted onboard so you can plan your return trip. As the boat set off towards Hallstatt, the looming mountains became bigger and the village came into clear sight. It was a really amazing experience, just being on the boat slowly approaching Hallstatt. I can’t seem to describe the awe I felt, but I definitely hope that everyone will get the chance to experience it at least once in their lifetime.

View of Hallstatt from the boat

When we got off the boat, we immediately made our way up a hill. I can’t quite remember where we were headed for, because we eventually had to turn back after a fair bit of climbing as the roads were closed. It had been snowing in the days before and the snow had frozen up, making the climb pretty dangerous. 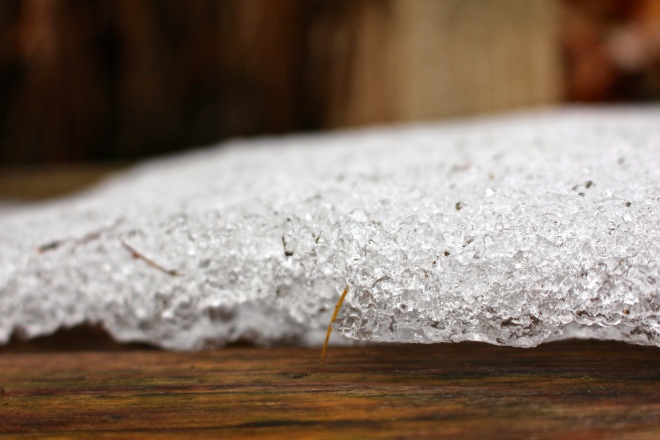 Slightly disappointed and a tad exhausted, we headed back down the hill and traveled to the other side of Hallstatt instead.

I had to resist taking photos every second because it seemed like everywhere I looked, there was some beauty to be captured. A quick tip: when you get off the boat, walk towards the right side, and up a slight slope to catch this magnificent view that you often see on postcards.

The best view of Hallstatt

Never be afraid to ask other travellers to take photographs for you. Sometimes, you get amazing photos like this one! Also, just because someone is carrying a DSLR, doesn’t make them a professional. Oh, and also, I find that Asians are better photographers in general. Must be all the practice we get from taking photos of our friends and all the selfies too.

Right at the heart of Hallstatt is the church that has become one of the landmarks of this charming village – the Evangelical Parish Church. Its spire is the most prominent piece of architecture in the whole of Hallstatt. 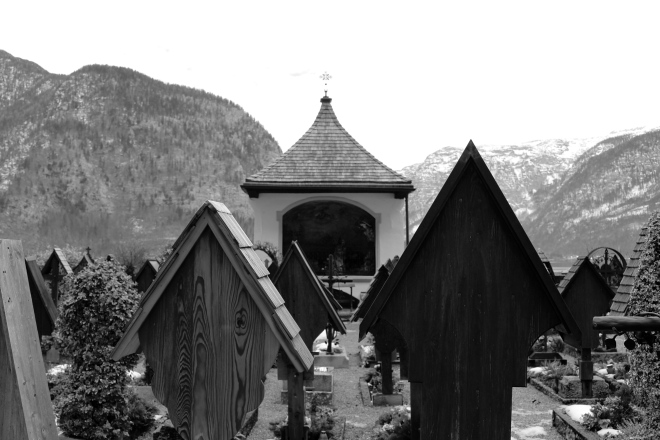 Cemetery at the Ascension of Our Lady Catholic Church

I have never been a fan of cemeteries because those we have in Singapore are just eerie, but the cemeteries throughout Europe aren’t. In some places, people actually have picnics in cemeteries! GASP! We wandered among the headstones, and I felt a sense of peace rather than fear. I never thought I’d say this but this was a really beautiful cemetery.

Now, back to die Salze (the salt). Even the bottles you get here are so pretty. I regret not buying a bottle for myself. It would’ve made a great souvenir. 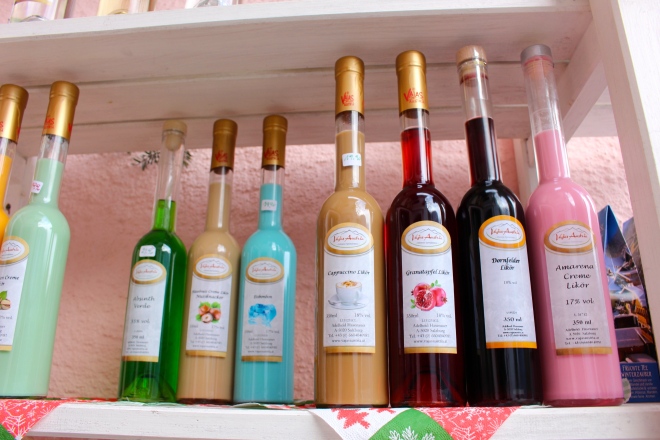 Instead, I got a small bottle of eggnog for Dj and I from this wonderful store. I never had eggnog before, but I knew it was a Christmas drink and I was already anticipating my favourite day of the year! It was really delicious. I shall try making my own eggnog this year!

We walked past the Market Square (Marktplatz). They were setting up a Christmas market. 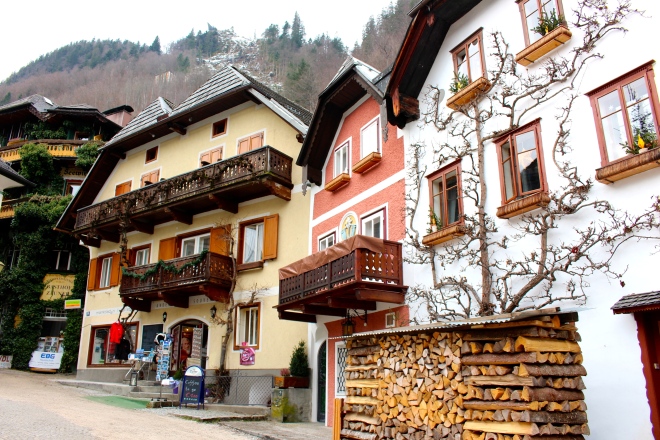 We walked to the extreme end of Hallstatt to catch another beautiful view of the village.

I actually won $50 worth of CapitaLand vouchers by entering this photo in the #TravelMadeDifferent contest on Instagram. YAY.

There was a sign that said “No entry” onto the dock, but we hopped over quickly to take this photo. Yeah, we’re badass. 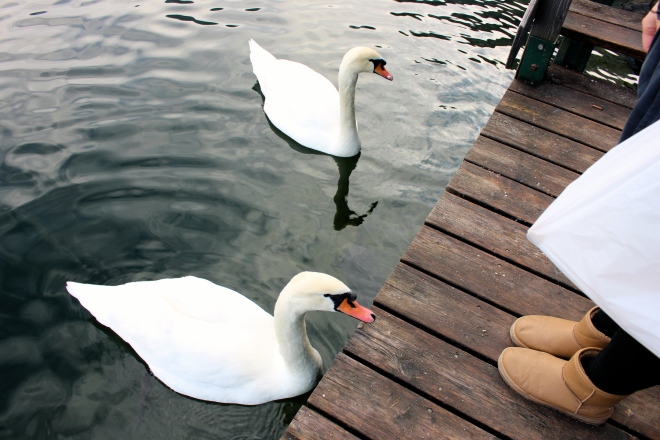 The glassy waters of Hallstätter See are just magnificent, aren’t they?

Although we knew that the mines were closed, we walked to the funicular anyway. The funicular brings people up to the world’s oldest known salt mine. It’s really a pity that we didn’t come before they closed for the winter.

Since no salt mine for us, we decided to frolic in the snow. There’s something magical about beautiful, untouched white snow. Of course, my ass was freezing and my jeans were damp afterwards. It was worth it. I felt like a child again. 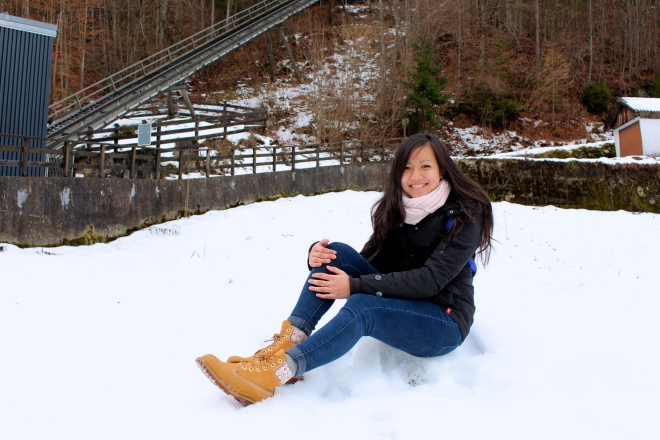 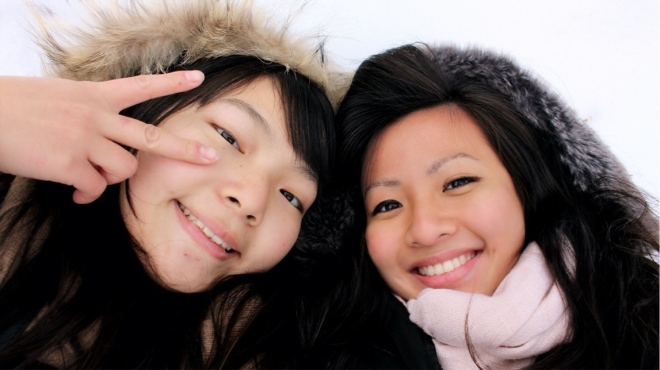 We walked back towards Marktplatz to grab some food.

Such a photogenic place

I had some pumpkin and apple soup to fight the cold, while Peiwen had some yummy fish at one of the cafés.

And of course, no meal is complete without dessert. We hopped on to another restaurant to have dessert. To be honest, we already had a slice of cake in the café, but you can never have enough dessert, right?

We had our dessert at the restaurant in the Seehotel Grüner Baum. It was a pretty posh place and I was worried that everything on the menu would be unaffordable. To my pleasant surprise, it was ok! We were dying for some Kaiserschmarrn, an Austrian specialty, which translates to “emperor’s mess”. It is a shredded pancake, usually dusted with powdered sugar and served with jam. Kaiser Franz Josef I loved it, and so do I! 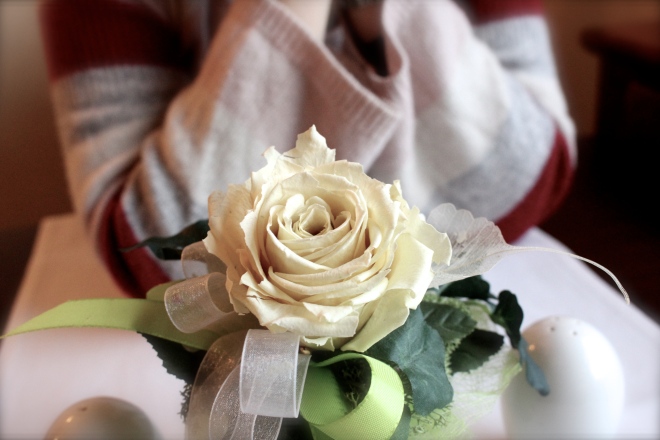 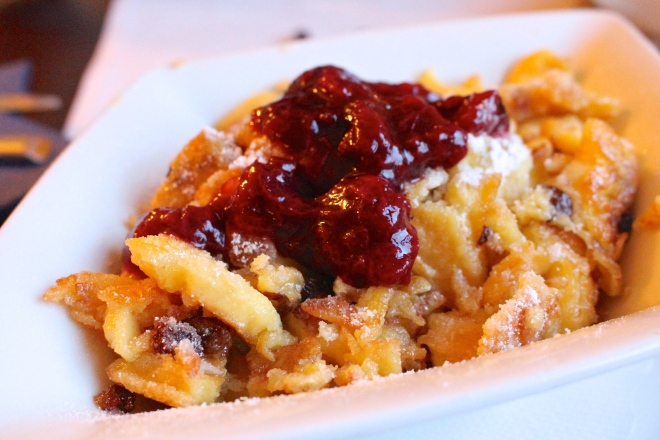 The Kaiserschmarrn served at Seehotel Grüner Baum is served with stewed plums, which was extraordinary! The pancakes were perfectly caramelised on the outside and fluffy inside. My only complaint is that there was way too much butter. We left the bottom bit untouched because it were literally soaking in butter. Nonetheless, the most memorable Kaiserschmarrn I’ve had.

We quickly made our way to the dock to catch the boat back to the train station.

Although it was just a few hours in Hallstatt, the place has left such a lasting impression on me. I would love to return to Hallstatt with Dj someday. Hallstatt is unspoilt; it transported me back in time. It really is heaven on earth.