We started our day early, much to my dismay. I had to drag myself out of bed today because it was so cold, and I knew the heater was not working. I even considered not taking a shower. I braced myself, counted to three and poured cold water all over myself.

Today, we worked on a different kind of puff. Pâte à choux, or choux pastry, is the pastry dough used to make some of our favourite French desserts – chouquettes, éclairs, choux à la crème, Paris Brest and religieuses just to name a few. We would be learning how to make chouquettes, éclairs au chocolat, religieuses au café and choux craquants chantilly vanille for our first demo. The religieuses are really interesting. They translate to “religious nuns” in French. Google “religieuse” and maybe, just maybe, you will see it.

For practical, we would be making the chouquettes (small choux pastry buns sprinkled with nib sugar) and choux craquants chantilly vanille (cream puffs topped with craquelin and whipped cream). We all thought that it would’ve made more sense for us to make éclairs instead of the chouquettes because éclairs are so much more popular and sellable.

Choux pastry can be a little tricky. Chef showed us how to dry out the dough over the stove and then how much eggs to add. The thing about recipes is that when they give you a certain weight of a particular ingredient, you tend to add all of it. However, for choux pastry, you really have to eyeball it. Adding a little of the eggs at a go will ensure you do not add too much liquid. If the dough is too runny, you have to start all over again. And that’s exactly what happened to some in practical. Chef made really beautiful choux pastry. The choux craquants are really exceptional. The contrast between the crispy shell and the soft whipped cream is to die for!

For our practical, we started with our choux craquants, making the craquelin first, then the pâte à choux. I was a little concerned initially that I had piped the dough out too small, because the craquelin that sat on top almost completely covered the dough. However, it came out pretty ok. I decided to fill the choux craquants with the extra crème chantilly because I found it odd eating such a big choux pastry without any filling in it.

While the choux craquants were baking, we piped our little chouquettes and sprinkled them with nib sugar. The chouquettes were trickier to pipe because Chef wanted them really small. All of mine were too big, although I personally thought they were small enough. Chef said that my smallest chouquette is the biggest a chouquette should ever be. Haha! 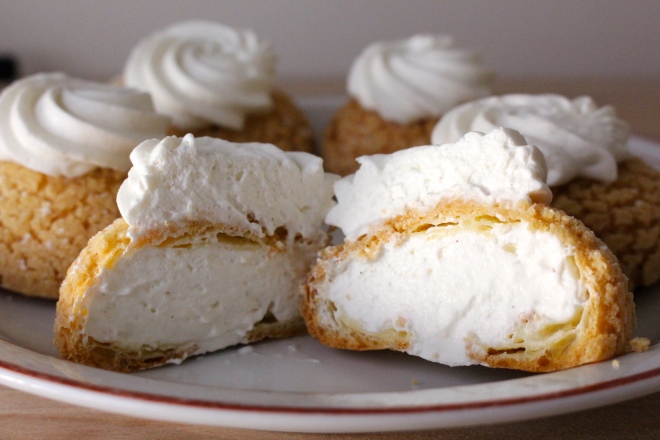 Although I didn’t feel like my choux craquants were all that great, Chef actually said that they were almost perfect. I just needed to ensure all of them were the same size. He used my piping as an example to the class as well. Me and piping! It’s really something I enjoy doing. Anyway, that was enough to make my day.

My chouqettes, as mentioned, were a little too big. I think I will use a small piping tip the next time round because the PF16 is too big and difficult to work with. I don’t think my chouquettes were baked all the way through either. But I couldn’t do anything, because it is the chefs that control the oven. I threw all of them away after taking this photo! What a waste.

We had a second demo at 3.30pm, where Chef taught us how to make Paris Brest and Saint Honoré. For practical tomorrow morning, we will be making just the Paris Brest. I kind of wish that we had the opportunity to make the Saint Honoré too. I think it is quite complex, especially the aesthetics. I guess that is one recipe I must try out when I’m back in Singapore!