From Madrid, we left Spain for Lisbon, Portugal. I was really looking forward to Lisbon. Portugal has been one of the countries I’ve always wanted to visit since I was much younger. Spain, of course, was my number one destination since I was a little kid looking through travel guides. Yes, I started young.

I love the streets of Lisbon. Cobblestoned, sloping, with quaint little buildings on both sides. Lisbon is also known as the City of Seven Hills. You will understand when you start exploring.

We arrived early in the morning and checked into our hostel. We stayed at Passport Lisbon Hostel. Location wise, it was good as it was in the centre of Bairro Alto and a stone’s throw away from Chiado, and there are many trams running right in front of the hostel. However, if you are a light sleeper, you might experience some problems. Right in front of the hostel is a statue of Luís Vaz de Camões, who is considered the greatest Portuguese poet. It is THE meeting point for many, especially at night. There also seemed to be music coming from I don’t know where late into the night, which really pissed me off. But the hostel itself was great. I might consider it the best one we stayed at. Clean, big beds, friendly staff and a very good breakfast!

So off to breakfast after checking in. I will remember this breakfast, because we had such simple, unpretentious, yet yummy food.

This croissant with a thin slice of ham was so yummy. Not the usual flaky, pastry croissant, but more like bread, soft, but layered, with a hint of orange, baked till golden.

The late morning we spent eating egg tarts and taking a nap. We were so exhausted. I recall walking down the streets with Dj in the evening to catch the sunset. 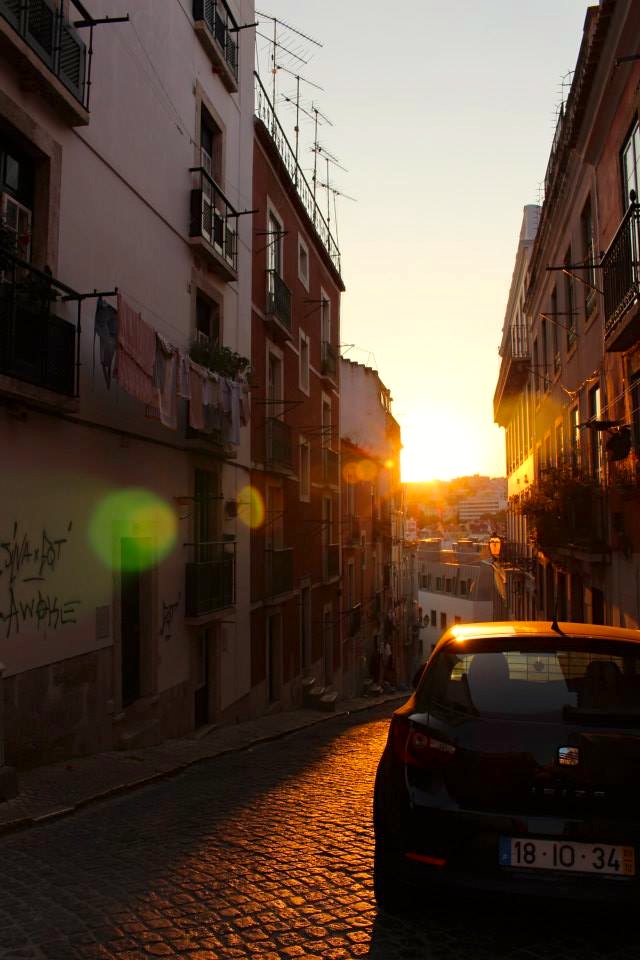 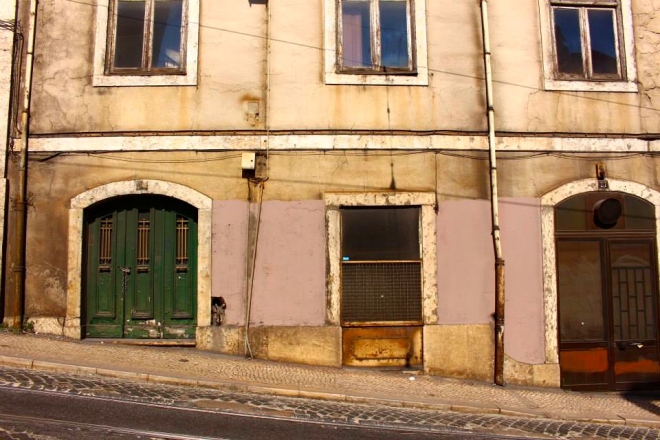 A lot of my photos of Lisbon have this yellow tint, and I think it is true when they say that yellow, or rather, gold, is the colour of the city. 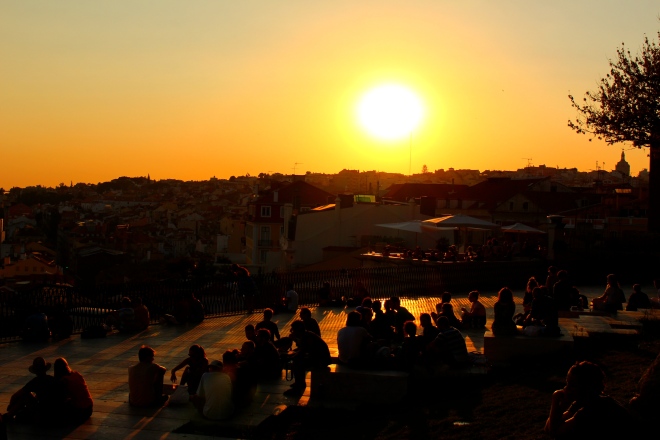 On the second day, we went for a free walking tour which started at the Luís de Camões Square. Good walking shoes are highly recommended. There is a lot of walking involved in this tour; and we walked for hours. Our tour guide was a funny chap, easy to talk to, and had lots of stories to tell about Lisbon. So, if in Lisbon, I do recommend this free walking tour. Link to their website here.

Here are some of the places where the tour brought us: 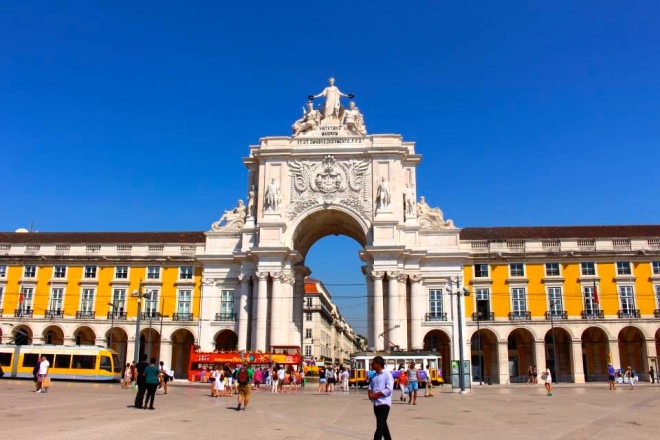 This arch was built to commemorate the city’s reconstruction after the 1755 earthquake. Praça do Comércio (Commerce Square) where the arch is situated, is HUGE.

Our tour also led us from Baixo to Alfama, which is the oldest district in Lisbon. The walk was, indeed, a step back in time. For photographers, this little district presents great photo opportunities. 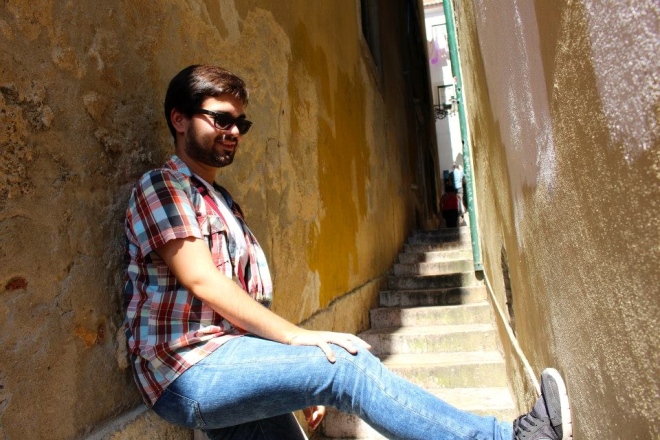 Sadly, I don’t remember his name, but what I do remember is that he thought us a Portuguese word – Saudade. Saudade has no direct English translation, but describes a deep emotional state of nostalgic or profound melancholic longing for something or someone that one loves.

It is the most beautiful word, to me.

View from the climb up at Alfama 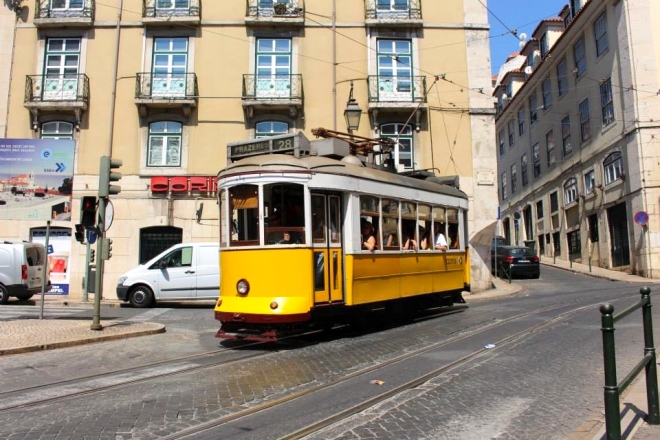 Tram 28 is listed as a must-do when in Lisbon. The iconic tram brings you many historical locations in Lisbon. We took the tram to Castelo de São Jorge and Miradouro, which is an excellent viewpoint high on one of the hills.

We took a day to go to Belem, which is a not-too-long train ride from Lisbon’s city centre. Why did we go there? For the original Portuguese egg tarts of course! Pastéis de nata were created by Catholic monks before the 18th century in Belém. Pastéis de Belém has been baking these scrumptious tarts since 1837. The queue was long, but it moved fast. We bought a couple of boxes of them and devoured them so fast. Was so tempted to get more, but they are really sinful.

I think what makes this egg tart so different from the ones we get in Macau, is its crust. Thin and crunchy, flaky. We got them warm and it was divine. The custard perfectly caramelised on top. 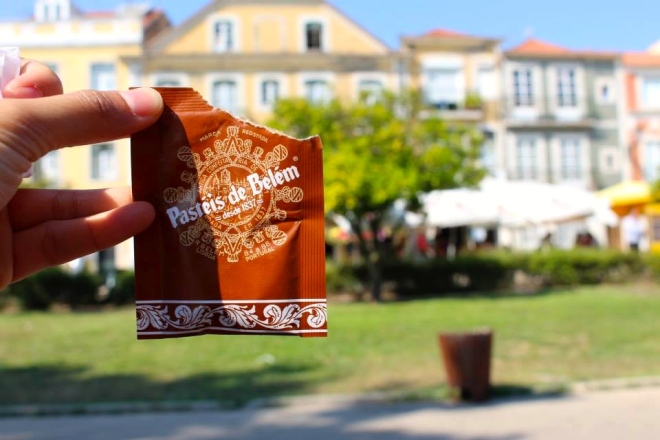 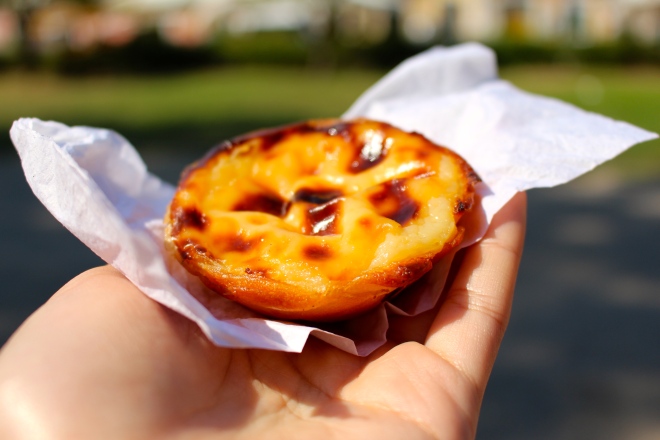 Traditionally, pastéis de nata is eaten with a dash of cinnamon, but I much prefer it without!

After gobbling down two whole pastéis de nata, we went for a walk to Jerónimos Monastery, a UNESCO World Heritage Site.

Had to steal Dj’s photos of the monastery, because strangely, I took none?! 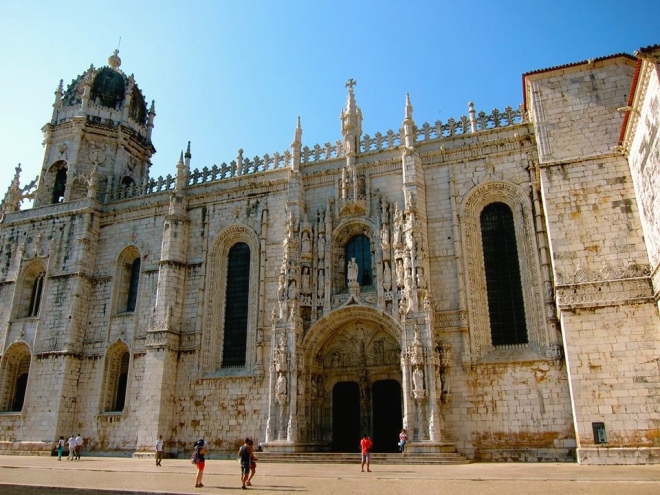 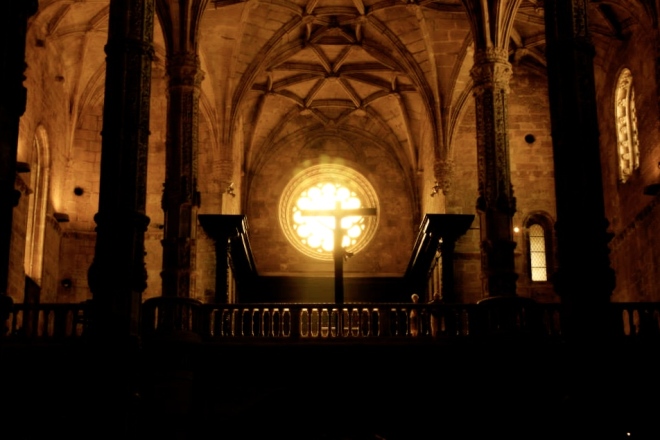 Just a short distance from the monastery is the Padrão dos Descobrimentos (Monument to the Discoveries), which lies on the northern bank of the Tagus River. The monument celebrates the Portuguese Age of Discovery. 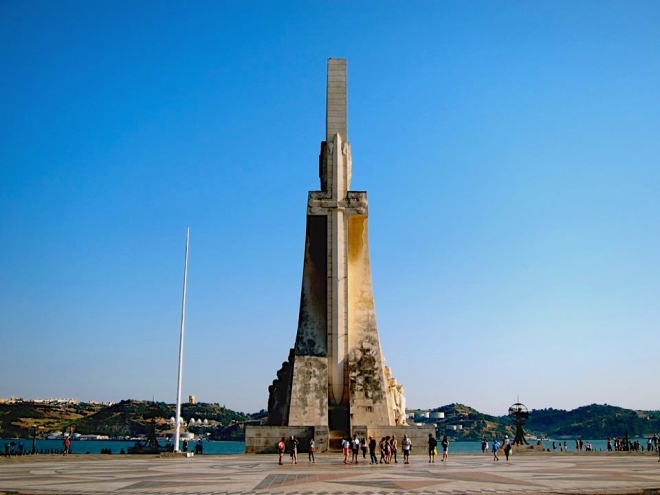 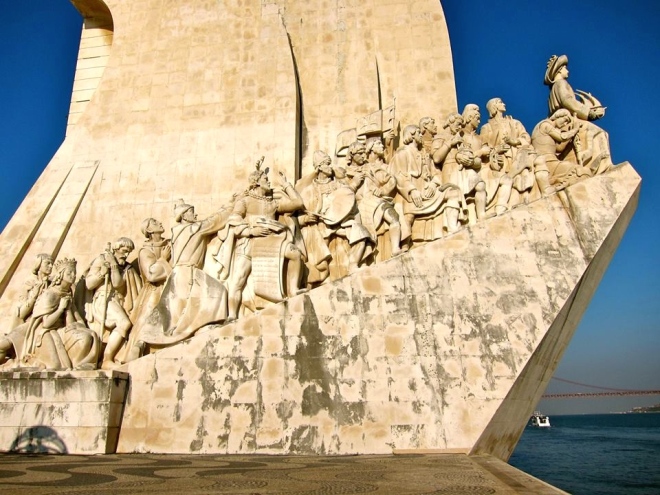 My Muay Thai kick in front of the Ponte 25 de Abril, or 25th of April Bridge, which connects Lisbon to Almada.

We heard a lot about Sintra from the locals, so we decided to spend our last full day in Portugal there.

The train ride to Sintra took about 40 minutes from the train station in Lisbon (I think it was Oriente). Indeed, Sintra is a mysterious place. It is also a UNESCO World Heritage Site and sits at the foot of the Sintra mountains.

Before exploring Sintra, we had an amazing meal at Café Saudade. 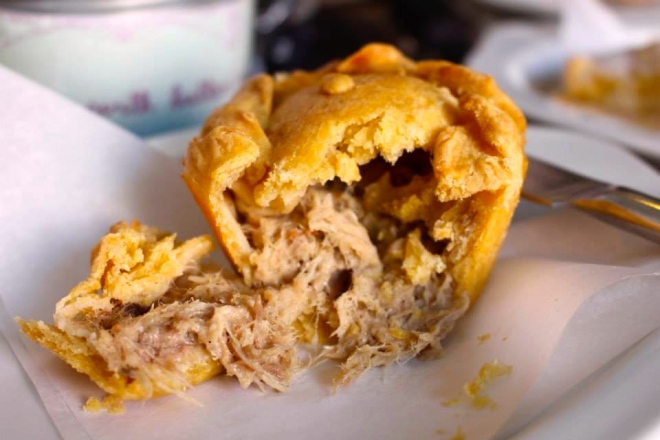 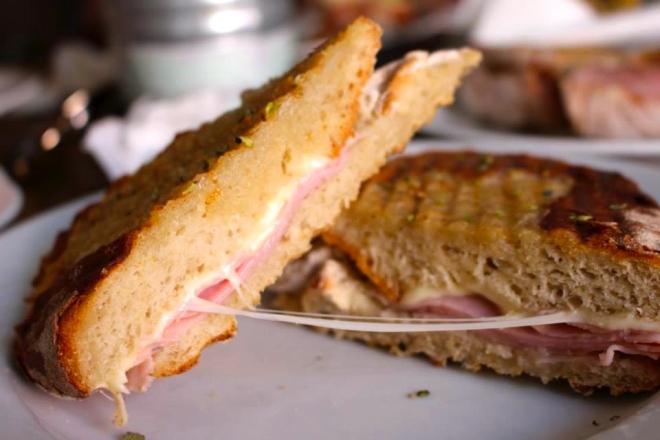 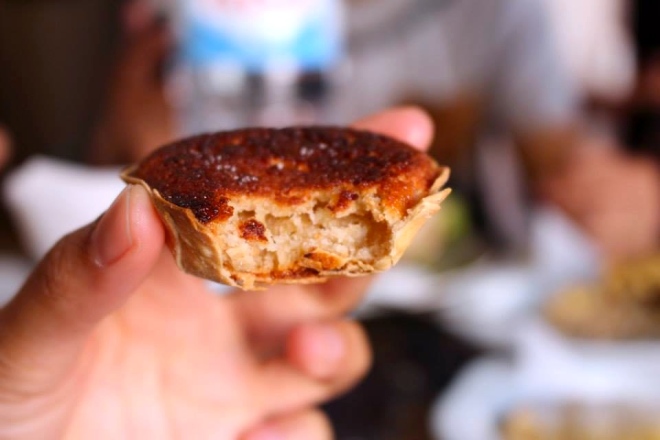 Queijada de Sintra – a local, cheesecake-like pastry which were a favourite of King Ferdinand II.

Saudade coffee with condensed milk – one of the best coffees I’ve ever had! 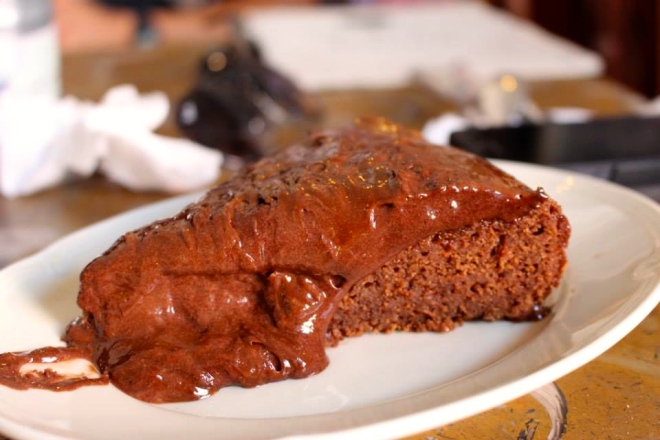 After our meal, we took a ride up to the attractions, to one of the most beautiful sights I’ve ever seen. 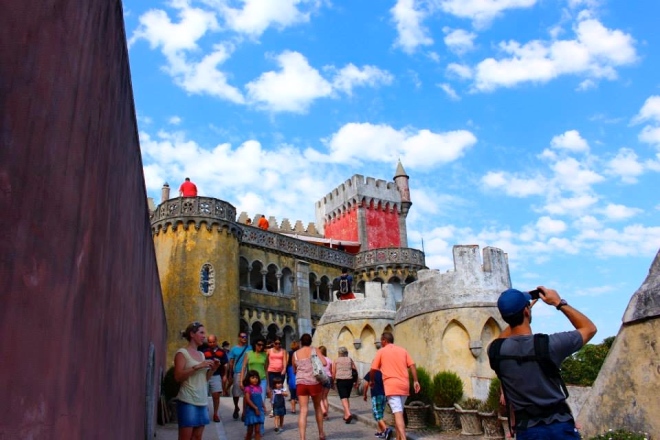 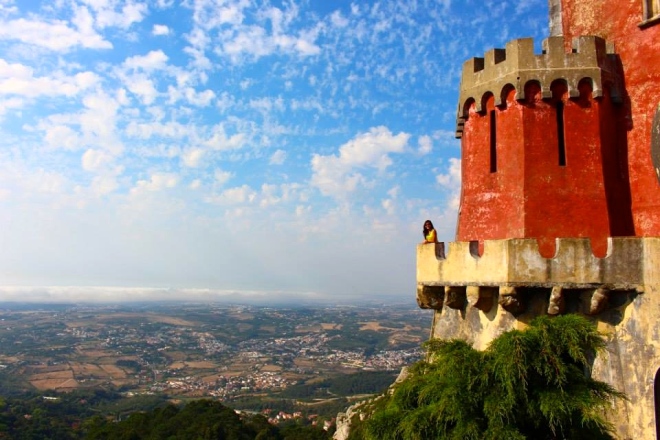 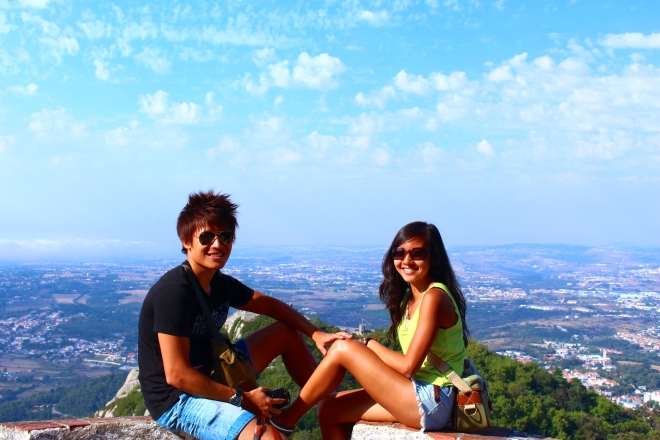 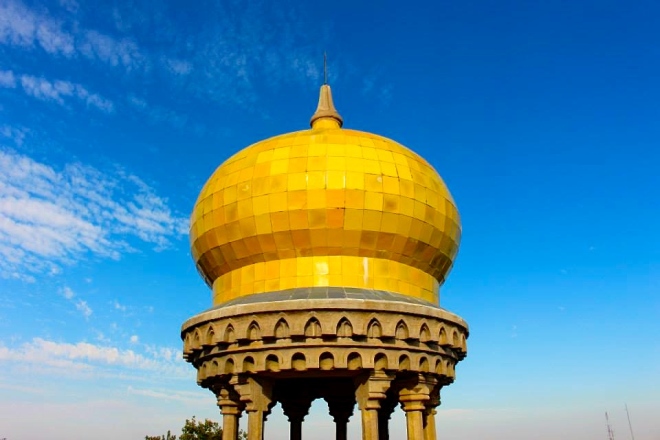 Such rich, vibrant colours. Palácio Nacional da Pena was surreal. The view from the palace was spectacular as well, overlooking Sintra. We spent a few hours at the palace before proceeding to one of the spookiest places I have ever been to. So spooky I refused to take photos in fear of capturing something supernatural in my picture.

The gothic façade of the palace gave me goosebumps, and when I entered, I immediately wanted to get out. Maybe it was the time of the day – it was late in the afternoon, that made things worse, or maybe it was how it seemed like we were the only living souls in the huge estate which includes a sprawling park with wells, fountains and other odd structures.

I tried to rush the guys, but they were looking for some landmark within the estate and I was so afraid that the sun would set and we would be left inside with no light to guide our way out. Alas, we gave up and hurried out. We had dinner at a restaurant (Trip Advisor recommended) before walking down the hill to catch our train. By then, it was dark, damp and cold. After the sun had set, the hill was shrouded by a mysterious fog. Funny how Sintra transforms from a crowded tourist attraction in the day, to a ghost town in the night.

On our last day, we had a few hours, so we hopped onto Tram 28 for a ride up to Castelo de São Jorge and Miradouro for the view.

One of the best views of Lisbon is from Castelo de São Jorge, a Moorish castle which overlooks the city and the Tagus River. Entry fee is just 4 Euros.