We got in to Paris at night, and once again, got a little lost finding our way to the hostel.

The next morning, I had the most amazing panini ever. Just a few steps away from the hostel is a little café called Epik Café. I had the mozzarella cheese panini, which was prepared with sesame bread. Just look at that… Yup. Best. The guy at the counter was really nice too! I didn’t see any tourists in the café, so prices aren’t too high, but you get really yummy, unpretentious food there.

We took a walk to Montmartre, the highest point in Paris.

An amazing Byzantine basilica sits on the summit and overlooks the whole of Paris. The Sacré-Cœur, or the Basilica of the Sacred Heart of Paris, is stunning in and out.

I got goosebumps when I stepped into the basilica, which doesn’t happen too often. There’s an understated beauty about the interior. I felt so at peace.

The Sacré-Coœur is one of the world’s most visited tourist attractions. There was a huge crowd gathered outside on the steps of the hill just enjoying the view of this scenic city. I found this view the most beautiful I saw in Paris, even more so than the one from the Eiffel Tower.

As we were admiring the view, there was a small commotion as a football freestyle street artist started to take his place on a narrow ledge along the steps. We were fortunate to have witnessed this outstanding artist perform. Iya Traore is his name. Be sure to check him out on Youtube. I have his entire performance recorded, which I will upload sometime in the near future (hopefully). 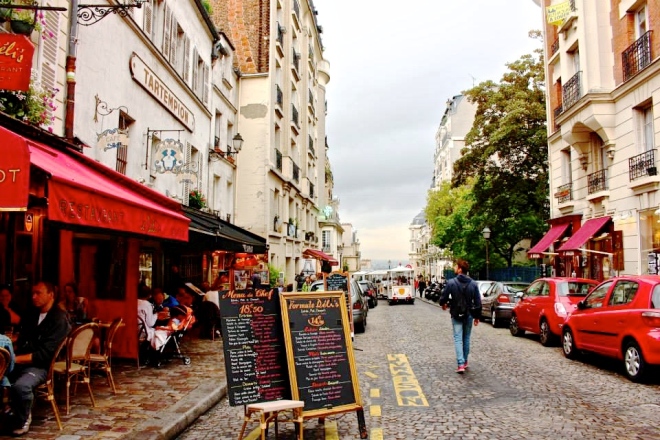 At the heart of Montmartre is Place du Tertre, where you can find portrait artists charging hefty prices for sketches/caricatures. The portraits are really realistic. Maybe if I one day become full of myself, I might get one.

A must-try in France is the French crêpe, which is somewhat of a very thin pancake. We ordered the Nutella crêpe, but they have many different fillings, both sweet and savoury.

On the way down, we decided to take the scenic route down to the park instead of the side stairs that we took on the way up. Oh boy, was that the biggest mistake! Just after taking this picture of the boys, we were “attacked” by a large group of black men selling friendship bracelets. They managed to separate us, grabbed our arms, and forcefully tied the bands around our wrists without our approval. Then, they demanded we pay for them. All I can say is, FUCK YOU. We paid because we didn’t want to get into any danger, considering that this bunch of hooligans were so much bigger than us. They even refused to take coins despite saying that they didn’t mind any amount. They probably had ten times more money on them than the three of us had combined! That totally ruined our day, and our already tainted impression of Paris. Ok, shall stop the rant now. But yes… Fuck you.

We did the free walking tour in Paris too, which was also organised by Sandemans.

The tour takes about three hours to complete, with a short break between to have a little snack at Eric Kayser. Be sure to try the financiers there. They were yummy!

The meeting point for the tour is at the fountain on Place St. Michel, and it brings you to the most popular tourist attractions in the city including Notre Dame de Paris, Jardin des Tuileries, the Louvre, Pont des Arts, and Place de la Concorde, where the tour ends. 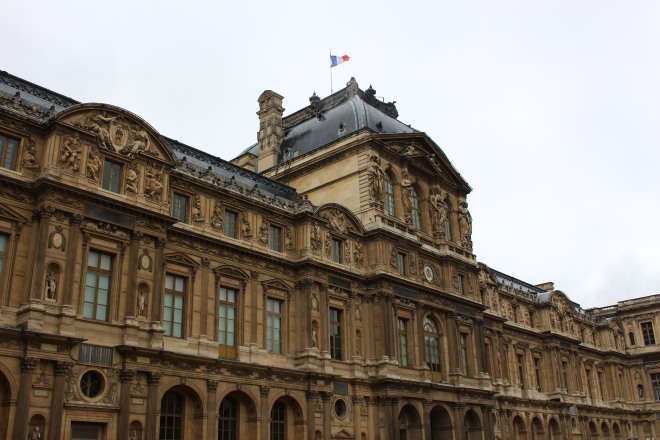 The weather was pretty shitty the entire time. European rain is really a pain. Also, it annoys the hell out of me because I get little raindrops on my camera lens and it makes my photos all blurry.

From Place de la Concorde, we walked straight down to the Avenue des Champs-Élysées, one of the world’s most famous streets and probably, one of the most expensive as well.

One of Paris’ most notable monuments, the Arc de Triomphe, stands at the Western end of Champs-Élysées, in the centre of Place Charles de Gaulle.

Us, at the Arc de Triomphe

We stood in the heavy drizzle in a short queue just to take this shot. I was secretly praying the other tourist that we asked to help us take a picture was a decent photographer. Fortunately, out of  multiple shots, we managed to get one without too many raindrops on my camera lens! And I also managed to hide them by making the photo black and white!

From the Arc de Triomphe, we decided to walk to the Eiffel Tower. It was quite a distance away, but walking is always a good way to explore. Had we decided not to walk, we would have never discovered this very significant place – Pont de l’Alma. Beneath this bridge was where the late Princess Diana had a fatal car crash. We took a moment to read the little notes people had left on the bridge for Princess Diana. She was indeed very much loved. 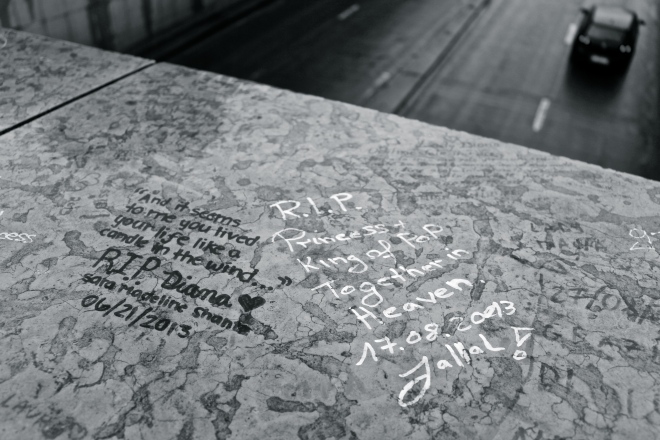 We continued walking towards the Eiffel Tower. 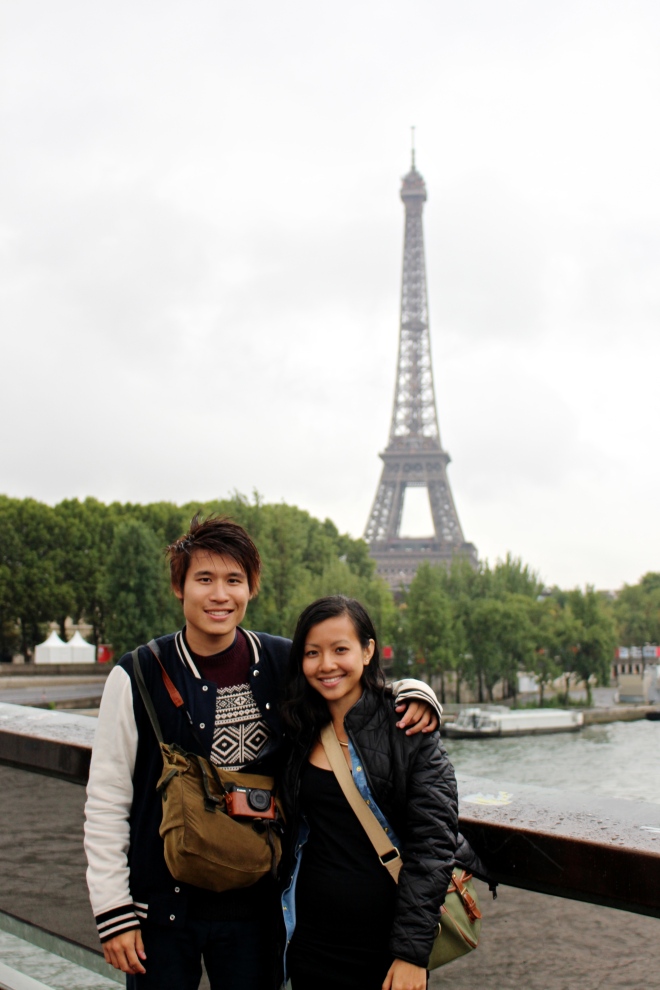 The sky was turning dark by the time we got to the Eiffel Tower. We got to see the tower both with its lights off, as well as with the lights on. It was really amazing getting to see the Eiffel Tower light up before our very eyes. 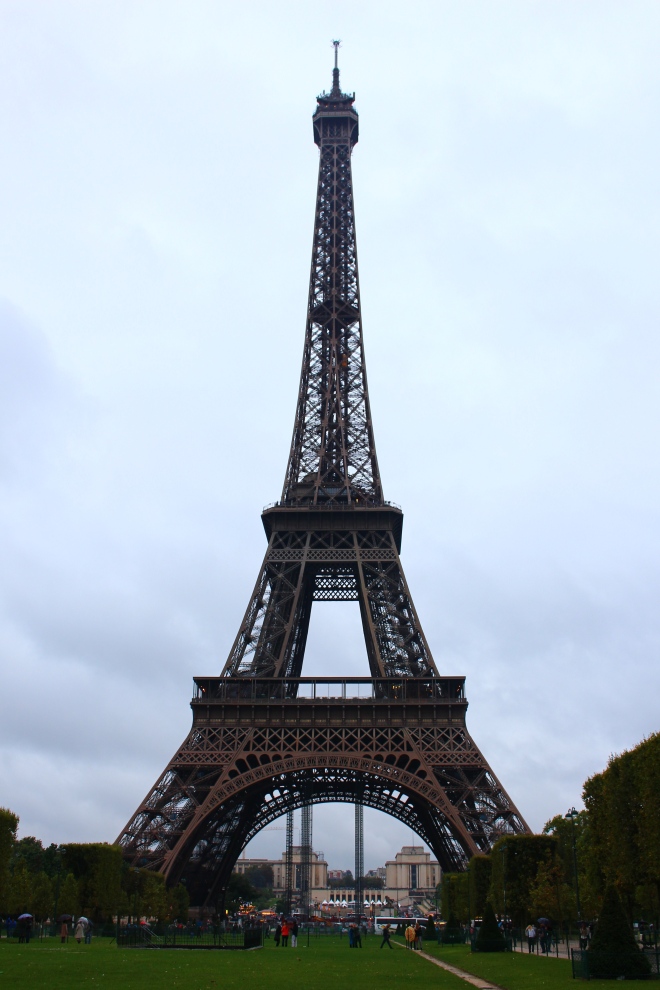 The Eiffel Tower certainly looks much better with its lights on. Without, it looks like a rust bucket. Then again, it is still magnificent and makes you feel so small.

We would return again the next day to climb up to the top, when the weather was better.

The next day, we visited Jardin du Luxembourg, which is the second largest public park in Paris. It was perfect weather – sunny and warm. There were many people out and about, jogging, reading books and just relaxing. We too, just took some time off to enjoy the warmth and the colours of the beautiful garden.

Somewhere in the vicinity was a Pierre Hermé, and I had to get some of those world famous pastries for myself. On the way there from the park, we passed the Church of Saint-Sulpice. There was a small flea market there with people selling all kinds of knick-knacks.

We were there at the right time too, as we got to hear the bell ring and it was really music to the ears.

Pierre Hermé is just a street away at Rue Bonaparte. Entering the store, I was in my little heaven. Such beautiful cakes and pastries! I can only dream of becoming a professional patissier and creating such works of art someday! 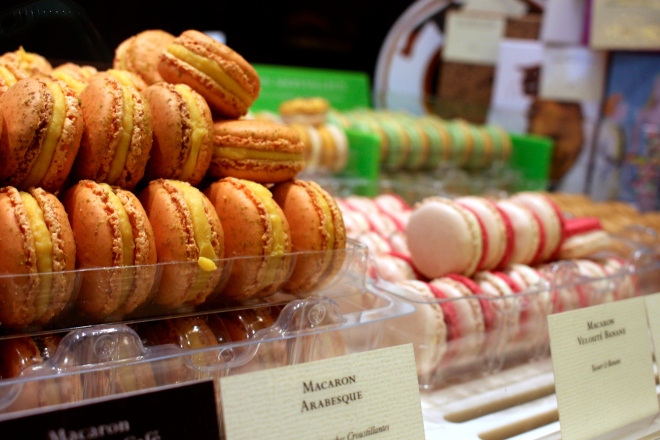 We bought assorted macarons, the famous Ispahan and the tastiest-looking thing I saw at the shop.

The Ispahan macaron is just amazing! The perfect combination of rose, lychee and raspberry. It is their best-selling macaron. Honestly, I am not the biggest fan of macarons; but that’s probably because the ones we get in Singapore are usually way too sweet. The macarons from Pierre Hermé really changed my mind. There was a subtle sweetness to the Ispahan macaron. Tart, fresh raspberries with chunks of lychee in a delicious rose petal cream, between two rose-flavoured macaron shells. 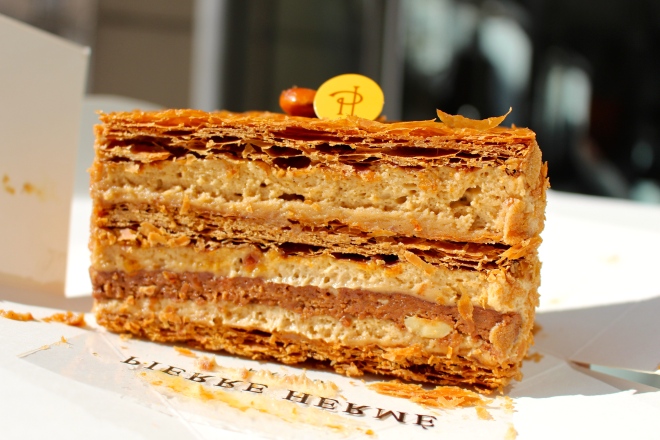 I couldn’t get my eyes off the 2000 Feuilles. It probably took a lot of effort to create this delicious dessert. Layers upon layers of flaky caramelised puff pastry with crushed hazelnuts and praline crème mousseline. It was sheer decadence. If there is anything I would recommend, this would be it.

We also got four macarons to share. Pierre Hermé is not exactly affordable, but I really wanted to try the macarons. I am really thankful for Joel and Dj for sharing 🙂

The flavours we got were: Infiniment Rose – rose & rose petal, Veloute Framboise – yogurt & raspberry , Infiniment Chocolat Porcelana – pure origin Venezuela Porcelana dark chocolate, and Infiniment Cafe Iapar Rouge du Bresil – red Iapar coffee from Brazil. I would say, my favourite among the four was the Veloute Framboise. It had a very good balance of sweetness from the macaron shells and the tartness of the yogurt and raspberry. We didn’t get to try the other more interesting flavours, including something with cucumber in it. I guess I’m not that adventurous with my food!

We sat outside on the pavement, savouring these little French macarons and enjoying the good weather. But soon, we were off to to climb the Eiffel Tower. That’s part two of Paris. Be back soon!