I recently turned 22. No, I don’t feel any different. In fact, this year, I didn’t really feel like having a birthday celebration, but my family went ahead any way. I said no cake, but there was cake; so I demanded no frosting. I also forbid the singing of a birthday song. Haha. Anyway, my cake was good. It is our family’s famous orange yoghurt cake. Moist and buttery. My favourite!

Mummy also made a Vietnamese mung bean dessert. It’s actually like tau suan, but the beans are pureed until a paste. Cooked with pandan and coconut milk, and topped with toasted coconut. Yum.

I had no gifts this year from my family. They all gave me angbaos which is awesome because I really need the money for exchange! Haha. That’s the end of part one of my birthday celebration.

Part two is the surprise from my two BFFs, Cindy and Ivy.

Cindy asked to meet her below my block on the 4th of May, at 11+pm, so I went down and I saw her with her laptop. Suspicious. We were supposed to Skype Ivy that night but when I asked her earlier in the day if we were Skype-ing her, she said no. But well, let’s just say I’m a smart cookie. Cindy handed me gifts from Ivy, that Ker Sheng brought back from Switzerland. Macarons, chocolate and a card from Ivy. I miss her so much! 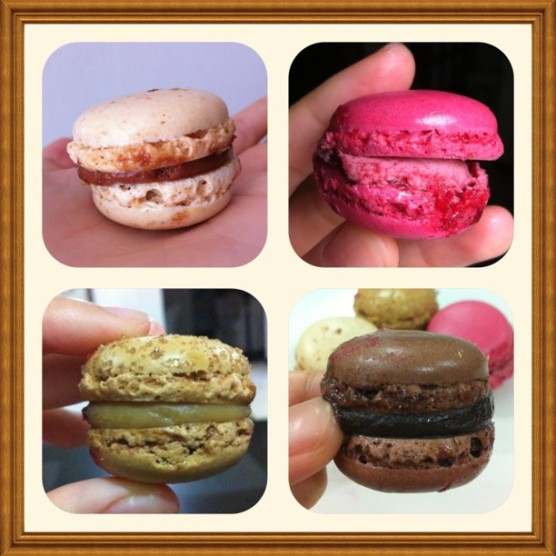 Macarons all the way from Switzerland

They taste extra good, cos they were delivered with love! 🙂

Cindy and Alvin also baked me a cheesecake. Ok, a slice of cheesecake. It was gooood. I ate the whole slice at 12.30am!

Her notebook also had such a sweet note in it, that I started crying as I read it. Sigh, my girls. What would I do without them!

Ivy was indeed on Skype! Surprise surprise! 😀 We went up to my place to talk for about an hour. I feel terrible because that was the first time I’d Skyped her this entire semester ): Been so caught up with work, that I feel like I neglected our friendship. But our friendship is strong. Although we only have two months in 2013 together, since I will be going for exchange when she returns, I know our friendship will not weaken with the distance and time apart.

Part three of my birthday: Meet up with Andrea

After one and half years, I finally met up with this good friend of mine! She missed my 21st, and I missed hers. So we were determined to meet again after the exams. At long last, we exchanged the 21st birthday presents we bought for each other. We headed to SPRMRKT for brunch, then to Once Upon A Milkshake at Maxwell Chambers for dessert!

Cozy interior, and they sell all sorts of stuff at SPRMRKT too. Cutlery, dishes, bottled drinks, eggs, crushed tomatoes…

The crumble at the bottom was soooo good. The crunch was perfect. The yoghurt was smooth and lightly sweetened and the berry compote was really good too. They probably make the compote themselves; I could see some chunks of blueberry. However, it was pretty expensive at $10. 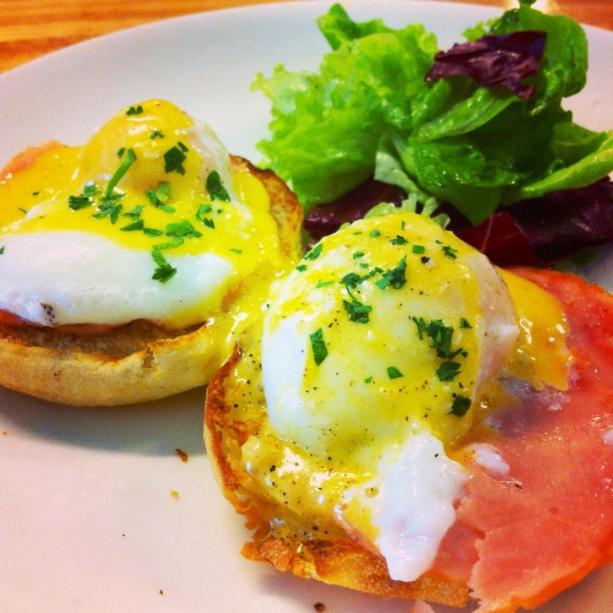 Ok, so I decided some time ago that I would have eggs benedict/florentine and the likes at all cafes I visit. So I jumped at the eggs benedict, having heard it was pretty good at SPRMRKT too. To my disappointment, the poached eggs were overcooked, so they were no longer runny ): However, I must say that I was still very pleased with the eggs benedict. The taste was still spot on. The honey baked ham was delicious and the crumpets were perfectly toasted and buttered. Doesn’t beat Rider’s Blackstone Benedict but it’s still good in its own way!

By the way, SPRMRKT’s menu changes each day of the week, so do check out their menu before visiting!

Andrea and I. I wore wedges because I always feel short when I go out with her. Haha!

Next stop was Once Upon A Milkshake at Maxwell Chambers, which is just a short walk away from SPRMRKT. We had Tiara Miss-U and White Coffee Cloud thick milkshakes. I absolutely love their milkshakes. They ain’t kidding when they say it’s really thick. One mistake we made was choosing two coffee flavoured milkshakes. After a while, they both tasted like the same thing. Oh well, I love my coffee! Since they taste similar, I think it’s more worth it to go for the White Coffee Cloud ($2.90 for a small) instead of the premium shakes, which are $4.90. They have a whole list of flavours to choose from, each represented by their own characters. Tiramisu by Tiara Miss-U. Pretty cute huh? 🙂 Next time round, I’ll have to try their other flavours. Maybe their red velvet or butterscotch.

I was supposed to have dinner with Zinnia only. I thought she already made plans, because she said she’d bring me to wherever it was. Then she asked me whether I wanted to have dinner at Hooters?! HAHA! No offense. Their wings totally rock, but two girls at Hooters? I started listing other places, and finally decided on Artichoke. Just last week, Hann Khee and I visited Overdoughs – a bakery by chef-owner of Artichoke and is situated just beside, and were completely impressed with the dessert there. Come on, look at this awesome thing they call their Roasted Banana Muffin:

Overdoughs also serves Middle Eastern desserts like baklava, Turkish pudding and the likes, as well as the normal chocolate brownies (which look better than most brownies, I promise), Snickers tart… I wanted to try every thing. I’m not kidding. I will definitely be going back there.

So, back to Artichoke. I asked Max along since we were at the gym together, and we’re all Waikiki friends. We sat down, and  shortly after our babaganoush, hummus and Turkish bread arrived, Miss Fan suddenly appeared! “Just dropping by,” she said. Yeah, right! Haha.

I love my bread. And the Turkish bread just made me love bread more. Just the right amount of crunch along the sides and softness in the middle. Just the way I like it! I think it was drizzled with some olive oil. It was amazing! We ordered two dips – babaganoush and hummus to go with the bread.

I personally love hummus. I first had it when I visited Doha a couple of years back. I loved it so much, I had it for breakfast every single day. Hummus with flatbread! The hummus was good, but I don’t think it can compare to our homemade hummus. We make really good hummus at home! Maybe ours isn’t that traditional. We put more garlic and a secret ingredient into it 🙂

The babaganoush was also a good pick. My friends aren’t as familiar with food as I am, so I just picked the two I thought were the most well-known. Miss Fan doesn’t like eggplant, but she ate quite a bit of the babaganoush. So  yes, it was good! When I come back the next time (and I will!), I definitely have to try the muhammara (red pepper, walnut and pomegranate) and labneh (yoghurt cheese and wild thyme za’taar). 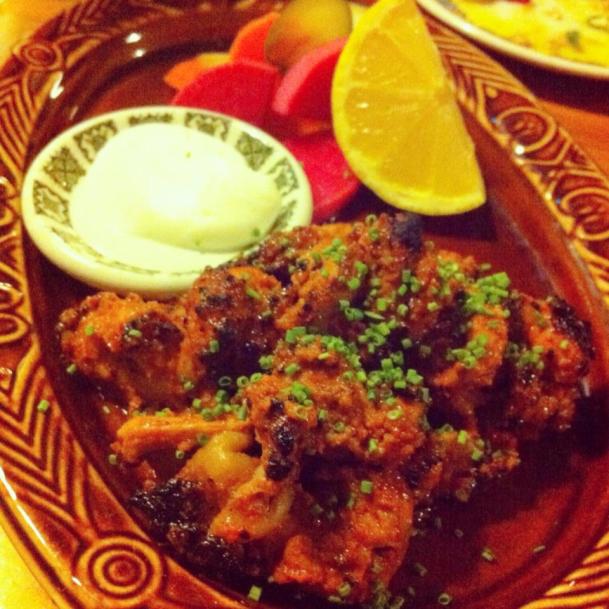 For our meat dish, we ordered the Shish Taouk, which is Lebanese BBQ chicken with a side of garlic whip and pickles. The moment Zinnia and I put it into our mouths, we exchanged THAT look. We proclaimed it was better than… Well, let’s just say we experienced “foodgasm”. The chicken was so tender, and was perfectly spiced. It does remind me slightly of tandoori chicken. So if you’re a fan of tandoori chicken, please have this when you visit Artichoke! I really liked the garlic whip as well. The garlic is pretty strong, so avoid it if you don’t like garlic.

Next up was dessert. I insisted on the baklava. Come on, we have to complete this Turkish/Middle Eastern experience! The baklava sampler comes with three fixed varieties, and our choice of another out of three. Baklava is traditionally made with phyllo pastry, nuts and honey. We buy baklava back whenever we visit Doha or Dubai.

My favourite was the walnut (bottom left). Didn’t quite like the traditional and the fig ones; I found the pastry too flaky for my liking. Then again, maybe it’s just me! Expect a sugar high from this dessert though! It is soaked with syrup or honey. You have been warned!

I still want to try the chocolate flavoured and apricot-pistachio baklava though! Looks like multiple visits to Overdoughs and Artichoke in the near future!

We also ordered the date pudding. Just the day before, I had sticky date pudding at Wimbly Lu, and it was decent. Not better than the one at Marmalade Pantry or Pique Nique, but decent. Then, this happened:

First thought: Looks like a swamp. Not very appetising.

Then we dug in and OMG. I can’t even start to explain how much this owns any other date pudding. 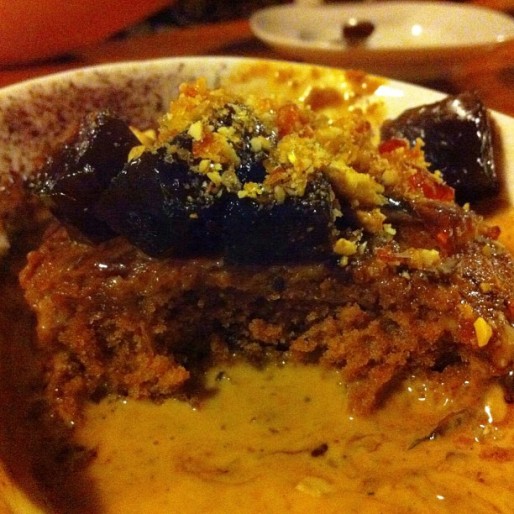 The date pudding is served with warm burnt milk, coffee agar, peanut caramel and smoked salt. Usually, date pudding just comes with toffee sauce, and if you’re lucky, a scoop of vanilla ice cream. This is a 10 out of 10 on my dessert rating scale! We wiped out the entire pudding and then scraped the cream off the dish. Then we decided that we would come back just for the date pudding any time. It’s $14 for the date pudding, but who cares?! It’s worth every cent, and every calorie.

In the midst of devouring our dessert, a waiter suddenly appeared with a mini fruit tart with a lit candle and a bouquet of flowers. I was honestly surprised because I thought we had ordered so much already! Anyway, it was really sweet of them! Thank you friends 🙂

Thanks for making this another memorable birthday! I have amazing friends who I know will always be there for me when I need them. Blessed.

My Birthday Celebration(s) and Reviews – SPRMRKT & Artichoke Cafe and Bar